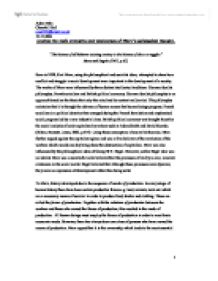 Analyse the main strengths and weaknesses of Marx's sociological thought.

Analyse the main strengths and weaknesses of Marx's sociological thought. "The history of all hitherto existing society is the history of class struggles" Marx and Engels (1967, p.67) Born in 1818, Karl Marx, using his philosophical and socialist ideas, attempted to show how conflict and struggle in social development were important in the development of a society. The works of Marx were influenced by three distinct intellectual traditions: German idealist philosophy, French socialism and British political economy. German idealist philosophy is an approach based on the thesis that only the mind and its content really exist. This philosophy maintains that it is through the advance of human reason that human beings progress. French socialism is a political doctrine that emerged during the French Revolution and emphasised social progress led by a new industrial class. British political economy was brought about by the social analysis of early capitalism by writers such as Adam Smith and David Ricardo. (Bilton, Bonnett, Jones, 2002, p.476) Using these concepts as a base to his theories, Marx further argued against the capitalist regime and was a firm believer of the revolution of the workers which would one day bring about the destruction of capitalism. Marx was also influenced by the philosophical ideas of Georg W.F. Hegel. However, unlike Hegel who was an idealist Marx was a materialist as he believed that the processes of reality as real, concrete existences in the social world. ...read more.

Exploitation also is able to provide those exploited to take individual or collective action against the system. This is the notion that Marx argues. Under capitalism the working class or proletariat (as known by Marx) produce goods for the benefit for the dominant owners of capital - the bourgeoisie. This class exploits the labour of the proletariat by paying them wages that are lower than the market value of the goods they produce. Capital was seen as nothing more than hidden human labour following as a 'dead' result of the workers 'live' labour as said by Gregor McLennan (The Story of Sociology). Marx went on to state: "Through alienated labour, therefore, man not only produces his relation to the object, and to the process of production, as alien and hostile men; he also produces the relation of other men to his production and his product, and the relation between himself and other men." 4 EPM (1844) MEGA I /3, p.91 Leading on from exploitation, Marx further argues the concept of alienation. Marx asserted that what singled out human beings from other species was our power to use our creative activity in order to influence our lives. Work could therefore be seen as a result of human intellect provided it was not alienating. For Marx, the alienation of labour reached its worst during industrial capitalism because workers were set to work on machines which performed meaningless tasks that were part of a larger process. ...read more.

Marx would argue that the causes of social occurrences lie at a level in which they cannot be seen by looking at individual events i.e. Marx was a realist. Although Marx makes it clear the material conditions that enable change, one could demand how the working class are able to take advantage of its historical opportunity. We could question whether the revolutionary consciousness happens on its own or whether it is necessary to have the leadership of a political party to help guide the process. (Bilton, Bonnett, Jones etc, 2002, p481). It could be easy to dismiss Marx's analysis on capitalism as we are able to see that it has not only survived, but has developed into a global system. One could also argue that as a system begins to develop crises, rather than destruct, it could have adapted itself in order to survive. The state also has an influence because it is the state that provides help for example, introducing welfare provision therefore reducing social conflict. However, despite these criticisms, Marxism is still relevant in the world of today and can still provide us with some questions we ought to consider. We could question whether capitalism is the defining feature of modern societies? Or question whether class membership is an important factor in our lives? This shows that although we may not fully support his views, Marx's ways of thinking at looking and analysing our society still has reference to the important questions we need to answer even today. ...read more.

3 Stars - A thorough and articulate essay that demonstrates a strong understanding of the conceptual aspects of Marxism, and good explanatory powers.
Where this essay could be improved is with a greater focus on the question, and with a balanced structure designed to evaluate the strengths and weaknesses of Marxist thought more explicitly - the first part of the essay is more explanatory narrative than argument in favour of Marxism, whereas insufficient time is spent on the counter argument.