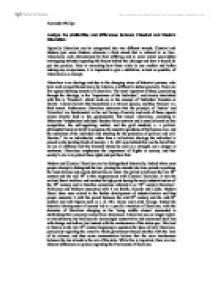 Analyse the similarities and differences between Classical and Modern Liberalism

Analyse the similarities and differences between Classical and Modern Liberalism Typically Liberalism can be categorised into two different strands, Classical and Modern (yet some thinkers advocate a third strand that is referred to as Neo-Liberalism), each characterised by their differing and to some extent unavoidably overlapping attitudes regarding the theory behind the ideology and how it should be put into practice. Prior to examining how these relate to one another and before making any comparisons, it is important to give a definition, as best as possible, of Liberalism as a concept. Liberalism is an ideology and due to the changing views of historical persons, who have each viewed themselves to be Liberals, is difficult to define precisely. There are five agreed defining tenants of Liberalism. The most important of these, percolating through the ideology, is the 'Importance of the Individual', and closely interlinked with this is 'Freedom', which leads on to the concept of 'Individual Freedom or liberty'. Liberals believe that humankind is a rational species, and thus 'Reason' is a third tenant. Furthermore Liberalism advocates that the principle of 'Justice' and Toleration' are fundamental in the well being of society and each of these aspects relates directly back to the quintessential first tenant. Liberalism, according to Habermas "emphasises individual freedom from restraint and is usually based on free competition, the self-regulating market, and the ...read more.

Classical liberals hold the view that individuals are 'isolated atoms', who are egotistical and self-seeking in nature; Macpherson refers to this as 'possessive liberalism.' Modern liberalism advocates a more optimistic view; that individuals have a social responsibility for one another and the helpless and weaker amongst them. These differing views are reflected in practice by the economic policies of each strand, and their attitude towards the role of the state. The general liberal view is that people should have the freedom to do what they want; to live and work and say what they wish. This is not absolute and Mill says in is essay 'On Liberty' that the "only purpose for which power can be rightfully exercised over any member of civilised community against his will, is to prevent harm to others." This view only accepted minimal restrictions to prevent this and thus did not accept self-harm preventing restrictions that are apparent today such as cycle helmet or seatbelt laws. Isiah Berlin explains that there are two "different concepts of Liberty": 'negative', which typically reflects an earlier time period and bases its principles purely on the absence of external restrictions and constraints, and 'positive', which focuses on the autonomous nature of the individual and follows Mill's argument that liberty is more than just freedom from restrictions, but also man's capacity to develop and achieve self-realisation and gain fulfilment. ...read more.

People should have free choice in economic activity, as they are rational and that for example if unemployment was rising wages would naturally fall to prevent this. This theory of 'laissez-faire' economics was revived later by the Neo-liberals such as Thatcher and Reagan, who reversed the trends of 'big' government intervention and claim the market was morally and practically superior to the government. Modern liberals take a different view on economic management, particularly reflected by the period post Second World War until 1975, which is associated with the application of 'Keynesian economics.' They disagree with the classical view that wages would drop to prohibit unemployment because of Trade Unions, and claim that according this view unemployment would enter a vicious spiral. The implications of this are that Modern liberal economics advocates the state managing the economy and that logically the state has a role to play in helping people achieve the self-fulfilment, that liberalism works towards. This is consistent with the Modern liberal view of freedom effectively as an 'enabling process'. The Modern and Classical strands of liberalism share similar principles - indeed if they did not, it would be wrong to classify them as two strands of the same ideology. It seems the fundamental differences between them rely on the 'negative' and 'positive' views, which define them and which lead on to the fundamental opposition inherent in liberalism: the role of the state. ?? ?? ?? ?? Alexander Phillips ...read more.

4 Stars - A thorough, articulate and well argued essay that demonstrates a strong understanding of the main elements of liberalism. The different liberal traditions are compared effectively, but I feel to improve there needs to be a sense of ongoing evaluation and a more decisive conclusion that directly addresses the question.