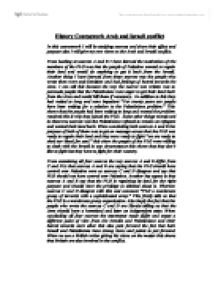 History Coursework Arab and Israeli conflict In this coursework I will be studying sources and show their effect and purpose also I will give my own views on the Arab and Israeli conflict. From looking at sources A and B I have learned the motivation of the members of the PLO was that the people of Palestine wanted to regain their land and would do anything to get it back from the Israeli. Another thing I have learned from these sources was the people who wrote them were anti-Semitism and had feelings of hatred towards the Jews. I can tell this because the way the source was written was to persuade people that the Palestinians were eager to get their land back from the Jews and would kill them if necessary. In addition to this they had waited to long and were impatient "For twenty years our people have been waiting for a solution to the Palestinians problem." This shows that the people had been waiting to long and wanted the problem resolved this is why they joined the PLO. Some other things mentioned in these two sources was the Palestinians refused to remain as refugees and wanted their land back. When concluding both sources A and B the purpose of both of them was to get an message across that the PLO was ready to regain their land and they were ready to fight "we are ready to shed our blood for you!" this show the people of the PLO were willing to clash with the Israeli in any circumstance this shows that they don't like to fight but they have to fight for their country. From examining all four sources the way sources A and B differ from C and D is that sources A and B are saying that the PLO should have control over Palestine were as sources C and D disagree and say that PLO should not have control over Palestine. ...read more.

When looking at source H I can say that the person who wrote it is trying to convey an idea that the Palestinians are fighting for the right purpose and not bombing the women and children but in any circumstances if the women and children are killed it will be by mistake. He also point out the fact that they are not prosecuting the Jews when he says, "We are not against the Jews. We want our land back". Telling us the Palestinians want their land back that they claim is rightly there's. After analysing all three sources and seeing which of them support the impression of Yasser Arafat I can reply by saying the sources that does not support the impression of Yasser Arafat in source E is source F the reason for this is because it is written by a British history book in 1984.The background of the British not supporting the Yasser Arafat is that Britain had promised Jews a homeland after the second world war and wanted them to have their own state. But the Arabs were furious because they help Britain to fight against the Turks in the Second World War and wanted independence. The other two sources support the impression of Yasser Arafat in source E they do this because they are Palestinians and want to achieve independence and show how good there leader Yasser Arafat is they also want to put in mind that they will do anything to get their land back from the Jews also Yasser Arafat has achieved something for the Palestinians people. When examining sources A, B, G and H it makes me understand the motivation of the PLO members by telling me that the Palestinians Liberation Organisation want to achieve independence for the Palestinian people. I can say that all the sources are useful because they give us an impression of how desperate the Palestinians are to get their land back. ...read more.

are saying things such as they do not want tot kill the women, children and Jews for no reason they try not to kill the women and children but if it happens it's by mistake. This is another reason I have chose them as being described as "freedom fighters" because it gives us a impression that the Palestinians are attacking Israel to regain Independence and get freedom not to kill innocent people. I have not chosen them as being "terrorist and murderers" because although there is not enough information backing up that they are so called "terrorist and murdered" I can say that they are attacking Israel for a reason and in the sources A, B, E G and H the Palestinian people who have written them are backing up a reason for each violent attack the Palestinians carry out for example in source G the Palestinian says "our people do not carry machine and guns and bombs because we enjoy killing. It is our last resort." This shows that the Palestinians do not kill for enjoyment it is there last option this source shows the Palestinian backing up his violent behaviour .I have not chosen the PLO being described as "terrorist and murderers" as a accurate interpretation because firstly there was not enough information on the sources to back up this information and the sources such as source D explain in little detail on the conflict and gave basic answer such as "In reality no place exited". This shows that the source has no back up to say that the PLO are being described as murderers or terrorist it does give us a idea on the matter but does not back it up where on the other hand the sources written by the Palestinian do back up there opinion. This is why I chose the PLO as being "freedom fighters" because they want tot fight to achieve independence and accomplished freedom not because they want to kill the Jews or the Israeli people. ...read more.