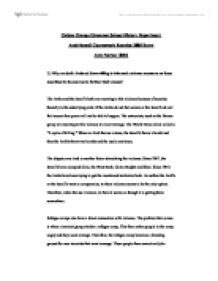 Calday Grange Grammar School History Department Arab-Israeli Coursework Exercise 2005 Entry Alex Norton 10BX 1.) Why are both Arabs ad Jews willing to take such extreme measures as those described in the sources to further their causes? The Arabs and the Israeli's both are resorting to this violence because of security. Security is the underlying point. If the Arabs do not feel secure or the Israeli's do not feel secure then peace will not be able to happen. The extremists, such as the Hamas group are resorting to this violence to exact revenge. The World News article called it, "A cycle of killing." When an Arab throws a stone, the Israeli's throw a bomb and then the Arab's throw two bombs and the cycle continues. The dispute over land is another factor stimulating the violence. Since 1967, the Israeli's have occupied Gaza, the West Bank, Golan Heights and Sinai. Since 1967, the Arabs have been trying to get the mentioned territories back. As neither the Arab's or the Israeli's want to compromise, to them violence seems to be the only option. Therefore, when the use violence, to them it seems as though it is getting them somewhere. Refugee camps also have a direct connection with violence. ...read more.

Recently, events such as the bombing of three American cars in transit and the bombing of the Hamas group shown in the sources for question one have been criticised by the public. Another factor worthy of notice took place on the 22nd of October. Indonesia and Malaysia i.e. Far East countries have a biased opinion of America. They feel that America is biased against Muslims and Palestinians. Therefore, for America to use their influence well, they need to overcome this image. This is linked to the influence of America in that they are the ones with the power but to use it, America needs to get a good image with everybody. If they are not respected in this case by the Muslims then they cannot exploit their ability. The decline of the USSR is also a push for peace. The decline of the USSR is linked with the rise of America in that previously each side had a different superpower to back them. The USSR, now Russia, did not have the power to match the USA and therefore they did not have the same influence as America. As America no longer has a challenger, it means that it has even more influence. America is now the paymaster for both sides, not just one. ...read more.

This resulted in the death of 29 Jews. Events like this make Israelis have an immense sense of insecurity. If Israel feels insecure then it is by no means going to be willing to give back the occupied territories. Only when they feel secure will they contemplate returning the occupied territories. Moreover, peace agreements such as the Road Map and the Oslo Accord will be impossible to implement if security is not present. Political leaders also have something to answer for when it comes to peace. Instead of aiming for peace, parties such as the Likud are going in the opposite direction to peace. Ariel Sharon - the leader of the Likud Party - as not got any trust after Israeli invasion forces came which he led encouraged the slaughter of many Palestinian women and children in the refugee camps of sabra outside Beirut in Lebanon. Being given the nickname "The Butcher of Beirut" is hardly the right way to go about getting peace. People like Ariel Sharon that are going the wrong way to peace are making it very difficult to achieve peace and implement the Oslo Accord and the Road Map. These factors clearly show that the Oslo Accord and the Road Map were impossible to implement mainly because of security. If Israel feels insecure then agreement will be impossible as shown by these factors. ...read more.