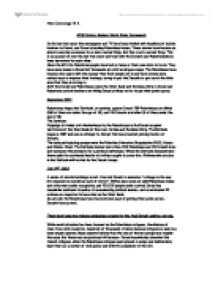 GCSE History Modern World Study Coursework In the last few years the newspapers and TV have been riddled with headlines of suicide bombers in Israel, and Israel attacking Palestinian homes. These stories have become an almost everyday occurance to us and a normal thing. But this is not a normal thing. This is an account of over the last few years and how both the Israelis and Palestinians have been terrorised by each other. Since the 60's the Palestinian people have had no home or their own state to live in. They have some towns in Israel but thousands are still in refugee camps. The Palestinians have become very angry with the manner that their people are in and have chosen some radical ways to express their feelings, trying to get the Israelis to get out of the little area that they are living in. Both the Israeli and Palestinians claim the West Bank and the Gaza Strip in Israel and Palestinian suicide bombers are killing Israel civilians to try to get their point across. September 2000 Palestinians began the 'Intifade', or uprising, against Israel: 759 Palestinians are killed (165 of them are under the age of 18), and 126 Israelis are killed (9 of them under the age of 18) The Intifade: Campaign of violent civil disobedience by the Palestinians in the Israel occupied territories of the West Bank of the river Jordan and the Gaza Strip. ...read more.

Rather, they want to breed hatred of Israel and thus use the refugees as a key weapon in the ongoing struggle against Israel. Israelis desperately want peace. Israelis want to stop worrying about bombs on buses and in malls. They want to put an end to burying their children, victims of terror or military engagements. In short, they want to lead normal lives, and they have demonstrated their willingness time and again to endorse far-reaching, even potentially risky, compromises in the quest for peace. Israelis, however, have learned the painful lessons of history. Peace without security can be tantamount to national suicide. And who knows better than the citizens of Israel, who include Holocaust survivors and refugees from Communist lands and from Arab extremism, how dangerous it can be to let one's guard down too quickly, too easily? Are Israelis simply to ignore Iran and Iraq's calls for Israel's annihilation? The insatiable appetite for acquiring weapons of mass destruction in Tehran and Baghdad, Syria's hospitality to terrorist groups bent on Israel's destruction, Hezbollah's mass of short-range missiles capable of reaching the northern third of Israel, and the call for suicide attacks against Israel heard in Gaza and the West Bank? Israel lives in a rough neighbourhood. To survive, it has had to be courageous both on the battlefield and at the peace table, passing both tests with flying colours. ...read more.

For example, according to the Political Dictionary of the State of Israel, Jews were 61.9 percent of Jerusalem's population in 1892. The historical and religious link to Jerusalem is especially important because some Arabs seek to rewrite history and assert that Jews are nothing more than "foreign occupiers" or "colonialists" with no actual tie to the land. Such attempts to deny Israel's legitimacy are demonstrably false and need to be exposed for the lies they are. They also entirely ignore the "inconvenient" fact that when Jerusalem was under Muslim (i.e. Ottoman and, later, Jordanian) rule. On May 15, 1948, the armies of Egypt, Iraq, Jordan, Lebanon, and Syria attacked the fledgling Jewish state, seeking its destruction. In the course of this war, launched by the Arab side, civilian populations were affected, just as in all wars. Controversies continue to this day about how many local Arabs fled Israel because Arab leaders called on them to do so or threatened them if they did not comply, how many left out of fear of the fighting, and how many were compelled to do so by Israeli forces. Importantly, hundreds of thousands of Arabs ended up staying in Israel and became citizens of the state. But the central point must not be overlooked - Arab countries began this war aiming to wipe out the 650,000 Jews in the new state of Israel, and by doing so the Arabs defied the UN plan for the creation of both Arab and Jewish states. Nate Cummings 10 A ...read more.