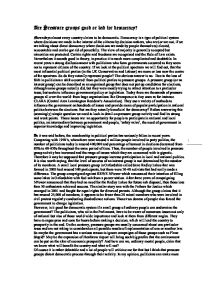 Are pressure groups good or bad for democracy?

Are Pressure groups good or bad for democracy? Nowadays almost every country claims to be democratic. Democracy is a type of political system where decisions are made in the interest of the citizens by decision makers, who are (or are not, if we are talking about direct democracy where decisions are made by people themselves) elected, accountable and can be got rid of peacefully. The view of majority is generally accepted but minorities are protected. Certain rights and freedoms are recognised and the Rule of Law exists. Nevertheless it sounds good in theory, in practice it is much more complicated and doubtable. In recent years a strong disillusionment with politicians who form governments occurred as they seem not to represent citizens of the country. If we look at the political spectrum we will find out, that the most influential political parties (in the UK Conservative and Labour) are more or less near the centre of the spectrum. So do they actually represent people? The obvious answer is no. Due to the loss of faith in politicians a shift occurred: from political parties to pressure groups. A pressure group (or an interest group) can be described as an organised group that does not put up candidates for elections, although some groups actually did, but they were mostly trying to attract attention to a particular issue, but seeks to influence government policy or legislation. ...read more.

But a small group of hippies was. They have organised Greenpeace, and although nobody listened to them at first they had not given up. Nowadays the group has hundreds of thousands of members, environment is the most important issue on the political agenda and every government claims to be "green". Did women have a right to vote in 1880's? No. But a group of feminists defended their rights and they finally became equal with men in 1929 at least in this sense. So undoubtedly those pressure groups had really changed our society for better. However, there are also some disputes whether all pressure groups are heard and listened to. We have already looked at the concept of political spectrum and found out that today most influential political parties are somewhere in the middle of it - in the so-called liberal framework. There are no parties that represent radical ideas and therefore governments do not accept any of them. Who will listen to strong-right organisation such as English Defence League since there is no party sharing the same ideology? Radical groups are ignored by governments so they have two options: to lay down arms or try to shift the ideology. ...read more.

So do pressure groups benefit the society or are they mostly thinking about the wealth of their own members? Well, it's hard to give a clear answer because a lot depends on the nature of a particular pressure group and on its sponsors. Although some interest groups are rather selfish such as Law society or BMA, others like Greenpeace or Make poverty History seem to act in the interests of society. So now, when we have almost reached the conclusion, we need to go back and answer the initial question. Are pressure groups good for democracy? Well, as for me, the answer is "No, they are not". Although some of them are trying to change the world for better, there are many more of those that bring disorder into the existing system and make it even more complicated. And there are many-many of those that are chasing their own interests like Law Society or BMA mentioned previously or are obsessed with a radical idea like, for instance EDL. To my mind, there are alternatives to interest groups which allow people to express their opinion and be involved in politics between the elections, for example referendums, which allow people to express their opinion on current legislation in a 100% nonviolent way. Compiled by Dariia Halatova 06/11/12 ?? ?? ?? ?? ...read more.