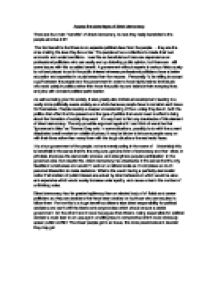 Assess the advantages of direct and representative democracy

Assess the advantages of direct democracy There are four main "benefits" of direct democracy, but are they really beneficial to the people who live in it? The first benefit is that there is no separate political class from the people - they are the ones making the laws they live under. The people act as a collective to create their own economic and social conditions. I see this as beneficial as it reduces dependence on professional politicians who can easily end up distorting public opinion, but there are still some issues with this so called benefit. A government without experts in various fields surely is not best placed to act in the public interest whereas professional politicians have a better education and expertise in crucial areas than the masses. Personally I'd be willing to accept a gulf between the people and the government in order to have highly trained individuals who work solely in politics rather than have the public try and balance their everyday lives and jobs with constant political participation. ...read more.

Direct democracy has far greater legitimacy than an elected body of officials and career politicians as they are decisions that have been decided on by those who are required to follow them. For me this is a huge benefit as citizens take direct responsibility for political decisions and can't shift the blame onto anyone else which should ensure a stable government. On the other hand it could be argued that citizens being responsible for political decisions could lead to an upsurge in unwillingness to compromise which could obviously spawn public conflict. The closer people get to an issue, the more passionate and devoted they may get. Assess the advantages of representative democracy It is a more practical form of democracy. As I have already said, direct democracy can only really work in small communities, as mass meetings to decide matters of state are nearly impossible. It is seen as the form of popular rule in large modern communities. I'm yet to find a drawback of a practical system, whatever its other flaws, so I can only conclude that it is indeed a genuine benefit. ...read more.

Personally I disagree and think that if people want to participate in politics then they can easily apply to take part in focus groups or vote in referendums and voter apathy is more a product of politicians that people can't relate to, constant un-kept manifesto promises and a lack of choice when it comes to individuals and political parties. It also helps maintain greater political stability as it separates people from the major political decisions of the time. A certain amount of public apathy is seen as useful for maintaining order because when people become more directly involved in politics they usually become more passionate which often leads to greater conflict. I would see this more as political stagnation rather than stability as I can't see how you can see public apathy in a positive light. Low voter turnout can lead to bad policy. If very few people vote, there is a very low chance that those in office will be voted out of office (political stagnation), regardless of what they do while they are in office. ...read more.