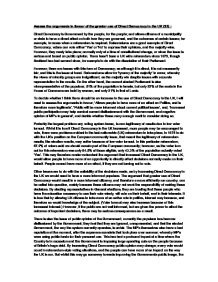 Assess the arguments in favour of the greater use of Direct Democracy in the UK (25) :

Assess the arguments in favour of the greater use of Direct Democracy in the UK (25) : Direct Democracy is Government by the people, for the people; and allows citizens of a municipality or state to have a direct effect on both how they are governed, and the outcomes of certain issues; for example, in cases when a referendum is required. Referendums are a good example of Direct Democracy; voters can vote either 'Yes' or 'No' to express their opinions, and the majority wins. However, they rarely take place; normally only at a time of constitutional change, or when the issue is serious and based on public opinion. There hasn't been a UK wide referendum since 1975, though Scotland has had several since, for example to do with the dissolution of their Parliament. However, there are issues with this form of Democracy; as although it is direct, it is not necessarily fair, and this is the issue at hand. Referendums allow for 'tyranny of the majority' to occur, whereby the views of minority groups are insignificant, as the majority win despite issues with accurate representation in the results. ...read more.

In this particular referendum, 67.2% of voters said we should remain part of the European community; however, as the voter turn out for this referendum was only 64.5% of those eligible, only 43.3% of the population actually voted 'Yes'. This may therefore render redundant the argument that increased Direct Democracy in the UK, would allow people to have more of an opportunity to directly effect decisions normally made on their behalf. People cannot have more of an effect, if they are not turning out to vote. Other issues are to do with the suitability of the decisions made, as by increasing Direct Democracy in the UK we would need to have a more informed populace. The argument that greater use of Direct Democracy would result in a more informed citizenry, and therefore a more efficiently run country, can be called into question, mainly because these citizens may not want the responsibility of making these decisions. By electing representatives in General elections, they are trusting that these people who have the education necessary to use their vote wisely, will vote on their behalf, and in their interests. ...read more.

But whilst this may go someway towards improving the Governments public image, the problems remain that it is difficult to organise Referendums, and doing so on a regular basis will cost a lot of time and money. The Government can also make it difficult for a referendum to actually be passed, so it is arguable whether the people in reality would have more power than previously, or whether it would be an illusion to allow the Government to save face. In conclusion, I think that whilst the theory behind a greater use of Direct Democracy sounds good; 'People can make their own decisions, be more informed, take a greater role in politics' etc; putting it into practice in a fair manner would be pretty much impossible. However, the current system of an electing a representative to vote on the behalf of an area of the populace has also proven to be flawed, and so whilst not the best solution, a country run by Direct Democracy may be a better alternative to the current situation. Though of course, it would be extremely difficult and expensive to implement, and is therefore never likely to actually happen. ...read more.

3 Stars - A well structured essay that contained the key components of evaluation and argument throughout. The question was addressed.
Where the answer had weaknesses was that the concept of direct democracy was mainly referred to in quite theoretical terms - the answer would have been stronger had there been greater use of examples of direct democracy in practice.