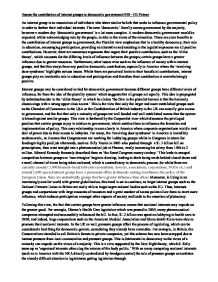 Assess the contribution of interest groups to democratic government

Assess the contribution of interest groups to democratic government [50] - Oli Palmer An interest group is an association of individuals who share similar beliefs that seeks to influence governmental policy in order to further their individual interests. The term 'democratic' literally means government by the majority, however a modern day 'democratic government' is a lot more complex. A modern democratic government would be expected, whilst acknowledging rule by the people, to take in the views of the minorities. There are clear benefits to the contribution of interest groups to government; the Pluralist view emphasises that in a healthy democracy, their role in education, encouraging participation, providing an alternative and assisting in the legislative process are all positive contributions. However, there are numerous arguments that negate their positive contribution, such as the 'elitist theory', which accounts for the differing levels of influence between the groups; certain groups have a greater influence due to greater resources. Furthermore, other issues arise such as the influence of money within interest groups, and that this sways from any positive democratic contribution; especially in America where the 'revolving door syndrome' highlights serious issues. ...read more.

In fact, $1.2 billion was spent on lobbying in health care in 2009, and indeed, large corporations such as the American Medical Association and Glaxo Smith Klein were able to promote their sectional interests. In the UK as well, pressure groups affect the process of legislating, which can be considered a bad thing for democratic govern, considering they already have a mandate. For example, in Britain, the Conservatives intended to sell Britain's forests to private companies, yet this scheme has now been scrapped due to intense pressure from local communities and pressure groups. This is detrimental to democracy as the views of a minority can impede on the views of a majority. This is a view supported by the New Right theory, which S. Reily sums up as 'organised interests often clog the arteries of the body politic.' With so many competing sectional interests (such as in America with the NRA directly contradicted by handgun control) the role of pressure groups exacerbates the already difficult situation in legislatures getting legislation through. Lastly, some consider certain Pressure Group tactics as undermining the rule of law and therefore being undemocratic. ...read more.

For example, the Lawrence v. Texas case received large numbers of amicus briefs from gay rights groups. The rights of minorities, which could so easily be restricted by government which adheres to the will of the majority, can be defended by sectional interests groups, thus assisting democracy. Lastly, their role in holding the government to account is also a key factor in Democratic government. In America, this role is fulfilled by groups such as Common Cause, who act as whistle-blowers. For example in recent times, they were the group that revealed Al Wynn's situation regarding his work with K Street, they led the charge against disgraced Tom Delay, and in 2008 led a successful campaign for the setting up of ethics commission in the house. This therefore is another valuable benefit to democratic government. In conclusion, whilst there are clearly undemocratic aspects to interest groups as seen with the elitist and corporatist theory, sectional interests and direct action, their democratic contribution outweighs this as they protect the rights of minorities, they hold the government to account, and play a huge role in educating the public and encouraging participation. Therefore, their contribution is largely democratic. ...read more.