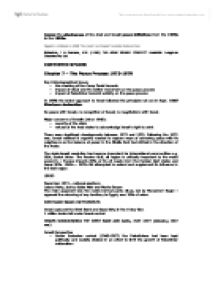 Assess the effectiveness of the Arab and Israeli peace initiatives from the 1970s to the 1990s.

Assess the effectiveness of the Arab and Israeli peace initiatives from the 1970s to the 1990s. Piggott, L & Rutland, S. (1998) "One Land: Two Peoples" Australia: Science Press Bickerton, I & Pearson, M.N. (1990) THE ARAB ISRAELI CONFLICT Australia: Longman Cheshire Pty Ltd. CONTESTED SPACES Chapter 7 - The Peace Process 1973-1979 Key Historiographical Issues - the meaning of the Camp David Accords - impact of Likud and the settler movement on the peace process - impact of Palestinian terrorist activity on the peace process In 1973 the Arabs' approach to Israel followed the principles set out in Sept. 1967 Khartoum declaration. No peace with Israel; no recognition of Israel; no negotiations with Israel. Major concerns of Israelis (since 1948): - security of the state - refusal of the Arab states to acknowledge Israel's right to exist There were significant developments between 1973 and 1979. Following the 1973 war, Israel realised it urgently needed to explore ways of achieving peace with its neighbours as the balance of power in the Middle East had shifted in the direction of the Arabs. The Arab-Israeli resolution has become important for international communities e.g. USA, Soviet Union. The Persian Gulf, oil region is critically important to the world economy - Europe imports 85% of its oil needs from the Persian Gulf states and Japan 90%. 1960s - 1970s SU attempted to extend and supplement its influence in the Gulf region. LIKUD December 1973 - national elections Labour Party, led by Golda Meir and Moshe Dayan The main opponent was the newly formed party Likud, led by Menachem Begin - opposed the returning of any territory to Egypt, won 30% of votes. WEST BANK ISRAELI SETTLEMENTS Israel captured the West Bank and Gaza Strip in the 6-day War. 1 million Arabs fell under Israel control. ISSUES SURROUNDING THE WEST BANK AND GAZA, 1967-1977 (following 1967 war) Israeli Perspective - Under Jordanian control (1948-1967) ...read more.

The Palestinian delegates in the joint Jordanian-Palestinian delegation were nonetheless counseled by an advisory committee that maintained contact with the PLO, thereby giving the PLO a role in the discussions. The conference lasted until 1 November and was immediately followed by bilateral talks in Madrid between Israel and each of the Syrian, Lebanese, and Jordanian-Palestinian delegations. Israel agreed to meet with the Palestinians separately from the Jordanians. The multilateral talks commenced in January 1992 in Moscow." http://www.palestinecenter.org/palestine/madrid.html The Oslo Accords by Michael R. Fischbach "As the public Israeli-Palestinian negotiation set in motion by the 1991 Madrid Peace Conference dragged on inconclusively in Washington, DC, in 1992 and 1993, Norwegian Foreign Minister Johan Jorgen Holst arranged for secret Israeli-Palestinian talks in Oslo. These talks initially took place between two Israeli academics, Yair Hirschfeld and Ron Pundik, and a high-ranking official from the Palestine Liberation Organization (PLO), Ahmad Qurai, who maintained contact with PLO chairman Yasser Arafat. Eventually, Israeli Foreign Minister Shimon Peres, on behalf of Prime Minister Yitzhak Rabin, entered the talks, which were kept secret from the world and from the Israeli and Palestinian negotiators in Washington, DC. By August 1993, the two sides had agreed on a 'Declaration of Principles' outlining an Israeli redeployment from parts of the occupied West Bank and the Gaza Strip and the establishment of a provisional Palestinian self-rule government. The two sides agreed to recognize one another publicly and negotiate a series of agreements to finalize these arrangements. They decided to negotiate so-called 'final status issues' at a later date. These included: the borders between the Palestinian entity and Israel; the return of Palestinian refugees; Jewish settlements in the Occupied Territories; the future of Jerusalem; and the question of eventual statehood for the Palestinian entity. Peres and Qurai initialed an agreement in Oslo in August 1993. This was followed by a 9 September letter from Arafat to Rabin pledging that the PLO recognized both Israel and United Nations Security Council Resolution 242, stating that the PLO renounced terrorism ...read more.

In addition, Arafat continued to insist on the Palestinian demand for a "right of return" of refugees to Israel, a demand that Israel cannot accept under any peace plan since it would mean the end of Israel as a Jewish state. The summit ended on July 25, without an agreement being reached. At its conclusion, a Trilateral Statement was issued defining the agreed principles to guide future negotiations. An optimistic summary of the event would be that difficult issues were attacked for the first time and progress was made. The Israelis and Palestinians both lost faith in the process: if there is no deal in this favorable environment, when could there be? After the close of the meeting, Barak said "Israel was ready to reach agreement at a painful price but not at any price." Arafat made no major statement before leaving the United States. In the following weeks, the Palestinians, having lost patience with the diplomatic approach, launched the al-Aqsa intifada (September 2000). I believe President Clinton's attempt in resovling this issue was the most possible. It was very generous for President Barak to offer so many things out of the "red line" as he said. The plan would have worked if Prime Minister Arafat didn't declare an "end of conflict". In doing research for this report, this was the first logically agreement that was real caught my attention in saying that this could have finally brought peace upon the Palestinians and Israelis. Barak's offer included many things that the Palestinians wanted. My question is to why Arafat's rejection of such a proposal where the Palestinians would get control over East Jerusalem, there would be the creation of a Palestine state, and many of the Israeli army withdrawal from areas of West Bank and the Gaza in exchange for the West Bank remaining under the Israel's control. More importantly this agreement, to me, was the first time sides were beginning to become less sentimental about their land, and there willingness to agree and give up thing was amazing on its own. http://www.cheathouse.com/essay/essay_view.php?p_essay_id=16168 http://campus.northpark.edu/history/WebChron/MiddleEast/YomKippurWar.html http://www.mfa.gov.il/MFA/Peace%20Process/Guide%20to%20the%20Peace%20Process/Israel-Palestinian%20Negotiations ...read more.