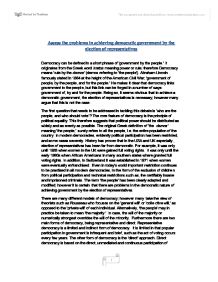 Democracy can be defined in a short phrase of ‘government by the people.’ It originates from the Greek word kratos meaning power or rule; therefore Democracy means ‘rule by the demos’ (demos referring to ‘the people’). Abraham Lincoln famously stated in 1864 at the height of the American Civil War; ‘government of people, by the people, and for the people.’ He makes it clear that democracy links government to the people, but this link can be forged in a number of ways: government of, by and for the people. Being so, it seems obvious that to achieve a democratic government, the election of representatives is necessary; however many argue that this is not the case.

The first question that needs to be addressed in tackling this debate is ‘who are the people, and who should vote’? The core feature of democracy is the principle of political equality. This therefore suggests that political power should be distributed as widely and as evenly as possible. The original Greek definition of ‘the demos’ meaning ‘the people,’ surely refers to all the people, i.e. the entire population of the country. In modern democracies, evidently political participation has been restricted, and some cases severely. History has proven that in the USA and UK especially, election of representatives has been far from democratic. For example, it was only until 1928 when women in the UK were gained full voting rights.  It was only until the early 1960s when African Americans in many southern states where granted full voting rights. In addition, in Switzerland it was established in 1971 when women were eventually enfranchised.  Even in today’s world important restriction continues to be practised in all modern democracies, in the form of the exclusion of children from political participation and technical restrictions such as, the certifiably insane and imprisoned criminals. The term ‘the people’ has been clearly adapted and modified; however it is certain that there are problems in the democratic nature of achieving government by the election of representatives.

There are many different models of democracy; however many take the view of theorists such as Rousseau who focuses on the ‘general will’ or ‘collective will,’ as opposed to the ‘private will’ of each individual. Alternatively, ‘the people’ may in practice be taken to mean ‘the majority.’ In case, the will of the majority or numerically strongest overrides the will of the minority. Furthermore there are two main forms of democracy, being representative and direct. Representative democracy is a limited and indirect form of democracy. It is limited in that popular participation in government is infrequent and brief, such as the act of voting occurs every few years. The other form of democracy is the ‘direct’ approach. Direct democracy is based on the direct, unmediated and continuous participation of citizens in the tasks of government. This would occur through practices such as referendums. For example, the Welsh devolution referendum in 1997on whether there should be a Welsh Assembly. Modern Democracies mainly take the representative approach; however many believe that this approach of electing representatives cause’s problems when trying to achieve democratic government.

First Past the Post is currently the system used both in the USA and UK to elect representatives. This particular voting system has come under great criticism that questions the democratic nature of the system. The way FTPT operates means that only the party that wins the most constituencies can get into government. It is possible that a party can get into power with less than half of the votes. For example, in the 2001 elections, Labour received only 42% of the vote. Also, the government does not necessarily reflect the views of the whole county as at the last election in 2005 only 59% of the people able to vote did so. It therefore distorts the vote in favour of Labour and Conservative, making it more difficult for the Liberal Democrats and other minority parties to be represented in the House of Commons. A further problem with the existing system was seen during the 1980s when the ‘Left vote’ was split, allowing the Conservatives to remain in power for four terms. Although FPTP does seem to provide strong and stable governments, the evidence does suggest that it does not achieve democratic governments.

Furthermore the US Electoral College has come under scrutiny and indeed criticism of its democratic nature. The Electoral College is a group of people chosen, by each state, to vote for a President and Vice President. Bush’s victory against Gore questioned the democracy within the Electoral College. The electors are chosen to represent the states during a national election. The Electoral College was written in to the Constitution as a workable compromise over two hundred years ago. The College prevented Congress from gaining too much power over the nation; however the representatives chosen to elect the nation’s leader may be Faithless Electors. This refers to those chosen to vote who, after pledging allegiance to a particular candidate, vote for their pledge’s opponent. This highlights an undemocratic nature of the College as people have put their faith into the Electors chosen, and they expect a typical vote; therefore this suggests a clear problem in achieving democratic government by the election of representatives.

FPTP has appeared to fail to achieve democratic government; therefore it is appropriate to consider other electoral systems, such as proportional representation. Proportional Representation (PR) as a title covers a wide variety of electoral systems where seats in parliament are proportion to votes cast. PR systems have been used in different forms in elections for devolution in Wales, Scotland and Northern Ireland. A form of proportional representation was used in the London mayoral election as well, through the supplementary vote. Both through AMS or STV, PR is used throughout Europe and has long been advocated by the Liberal Democrats and support for it has grown in Britain since the 1970s. PR also helps to minimise the number of votes that are wasted. For example, in the UK 1992 General Election, the Liberal Democrats won 17.9% of the votes but however only gained 3.1% of the seats. PR does appear more likely to produce a democratic government; however many have found concerning weaknesses. Under PR, and the almost certain outcome of coalition government, evident in Italy for example; minor parties would therefore have undue influence. This is particularly worrying, as PR can be very inclusive of extremist parties of the left and right. A key example of this is was in the French 2002 election where the racist party of ‘Le Pen’ featured very highly in the political order. The first round results were ‘Chirac’ 19.65% and ‘Le Pen’ seconded with 17.6%. PR does suggest a form of direct democracy; however it also highlights certain problems in achieving democratic government by the election of representatives.

In conclusion, the evidence provided presents a strong argument suggesting there are problems in achieving democratic government by the election of representatives. FPTP appears to fall sort of the ‘democratic mark’ defined in the Greek definition mentioned in the introduction, as the examples of Labour in 2001 and Bush’s victory in 2000 show. PR seems to be the obvious alternative, as it is far more democratic according to the original Greek definition as opposed to FPTP; however the outcomes of PR in some examples have shown to be weak, and produce unstable governments. It is therefore evident that by electing representatives, creates clear problems in achieving a democratic government.