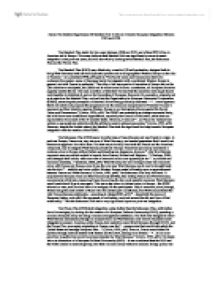 Assess The Relative Significance Of Marshall Aid To Moves Towards European Integration Between 1945 and 1954.

Assess The Relative Significance Of Marshall Aid To Moves Towards European Integration Between 1945 and 1954. The Marshall Plan lasted for four years between 1948 and 1952, and offered $22 billion in American aid to Europe. This essay believes that Marshall Aid was significant in moves towards integration in the post war years, and will show this by looking at the Marshall Plan, the Schumann Plan and the Pleven Plan. The Marshall Plan (1947) was, effectively, a result of US self-protection, designed both to bring West Germany back into the diplomatic process and to bring together Western Europe on the side of America - as Lundestad (1998, p29) puts it, "The Soviet Union and Communism had to be contained; the western zones of Germany had to be integrated with a revitalised Western Europe in general, and with France in particular." The offer of aid was open to all countries of Europe but, as the USA must have anticipated, the USSR and its allies turned it down: nonetheless, all European countries urgently needed the aid. ...read more.

changed their minds, with some sort of economic union now appearing to be "...a political and economic necessity..." (Dedman, 2000, p43). West Germany too was willing to enter into economic union with France and Europe, since it was the only way West Germany could ever be brought back into the fold: "...stability and union within Western Europe rested ultimately upon a rapprochement between France and West Germany." (Urwin, 1995, p44). The Schumann Plan duly delivered. It proposed the European Coal and Steel Community (ECSC), thus linking France and West Germany economically whilst also reassuring France by pooling the two most essential resources West Germany would need should it go to war again. This was a step closer to federal union in Europe - the ECSC allowed no veto, and involved loss of sovereignty for the participants. Only 6 countries joined, though, Britain being the most notable of those who did not take part: nonetheless, the ECSC consolidated the vital Franco-German relationship - according to Henig (2002, p25) ...read more.

The collapse of the most far-reaching plan, in integration terms, led to setbacks - "An alternative to the EDC had to be found." (Urwin, 1995, p69), and the USA went back to its original plan of rearming West Germany through NATO. The Pleven Plan was thus significant in demonstrating that the countries of Europe were not yet ready for high level integration. In conclusion, all three of the Marshall Plan, the Schumann Plan and the Pleven Plan were significant, in some way, to European integration in the period 1945 to 1954. The Pleven Plan was significant in that it showed that integration in terms of high politics was a little too much for Europe at the time; the Schumann Plan was arguably the most significant of the three, since it paved the way for the creation of the European Economic Community a few years later; but the Marshall Plan was nearly as significant, since it united the whole of Western Europe and demonstrated that integration was the best way forward in the post war years. Thus Marshall Aid was quite significant to moves towards European integration between 1945 and 1954. ...read more.