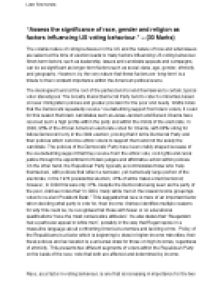 Assess the significance of race, gender and religion as factors influencing US voting behaviour.

﻿Liam Simmonds ?Assess the significance of race, gender and religion as factors influencing US voting behaviour.? ? (30 Marks) The volatile nature of voting behaviour in the US and the nature of how and what issues are salient at the time of election leads to many factors influencing US voting behaviour. Short-term factors, such as leadership, issues and candidate appeals and campaigns, can be as significant as longer-term factors such as social class, age, gender, ethnicity and geography. However, by the very nature that these factors are ?long-term? is a tribute to their constant importance within the American political scene. The ideologies found at the root of the parties tend to lend themselves to certain, typical voter stereotypes: The broadly liberal Democrat Party tend to cater to minorities based on laxer immigration policies and greater provision for the poor and needy. Watts notes that the Democrats repeatedly receive ?overwhelming support from black voters, it could for this reason that black candidates such as Jesse Jackson and Barack Obama have received such a high profile within the party and within the minds of the electorate. In 2008, 95% of the African American electorate voted for Obama, with 88% voting for fellow Democrat Kerry in the 2004 election, proving that it is the Democrat Party and their policies which convince ethnic voters to support them and not the solely the candidate. ...read more.

For instance, Watts identifies that ?one of the fastest-growing groups in the United States is the Hispanic population.? David compounds on this by saying that ?Latinos, all political pundits agree, are the sleeping dragon of US politics.? At the 2012 Republican National Convention, around a third of the speakers were black and Hispanic. This is a small example of the Republican Party beginning to court the minority vote. A 2012 Wall Street Journal poll had 0% of African-Americans saying they intend to vote for Romney. At 32%, support among Latinos is higher but still remains pathetically low given what Republicans have had in the past ? in 2004 George W Bush won 44%. As a result, the party of Lincoln is increasingly dependent on just one section of the electorate ? white people. Simply; the more black and Latino voters the Republicans alienate, the more white voters they need to replace them. Despite their universally agreed importance, 2012 Republican presidential nominee Willard Mitt Romney has been criticised by Florida Republicans for writing off African American voters, Art Wood chairman of the Republican party in Hillsborough County argues that ?"Romney did a really poor job with minorities.? Regardless, the fact that the factor of race can have the effect of altering the mentality of one of the main parties in the US is surely a testament to its significance. ...read more.

In recent elections, a gender gap can be seen in voting statistics. In 2004, President George W. Bush ability to increase his share of the women?s vote to 48%, up from 43% in 2000, was a major reason why he substantially increased his share of the popular vote, an example of the power that the women?s vote can have on an election. According to Watts; ?the gender gap averaged 7.7% between 1980 and 2000.? In 2008, the female vote swung heavily Democratic; with 56% of females voting for Obama. Commentators suggest that women have leaned to the left in the last few years because they associated Reagan, Bush and Speaker Newt Gingrich with serious cuts in welfare and expenditure, as well as a more hawkish attitude on foreign policy, political attitude more associated with males. With such a consistent gap between the two parties, any additional votes from either side of the gap would be incredibly useful for the party, as seen with Bush in 2004, and as such, an influential voting factor. Ultimately, long-term factors such as race, religion and gender are always going to have high levels of significance. However, to distinguish the importance of one over another is difficult, for all three factors as well as income and social status are highly influential to voters, and as such, voters will exhibit characteristics of all three areas. ...read more.