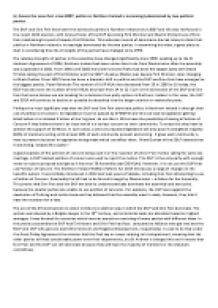 Assess the view that, since 2007, politics in Northern Ireland is increasingly dominated by two political parties.

Transfer-Encoding: chunked ﻿(a) Assess the view that, since 2007, politics in Northern Ireland is increasingly dominated by two political parties. The DUP and Sinn Fein have been the dominant parties in Northern Ireland since 2007 and this was reinforced in the recent 2016 election, with Arlene Foster of the DUP becoming First Minister and Martin McGuinness of Sinn Fein maintaining his post of deputy First Minister. This unbroken record of dominance has led many to claim that politics in Northern Ireland is increasingly dominated by the two parties. In examining this view, a good place to start is considering how the strengths of the parties have changed since 1998. The relative strengths of parties in the Assembly have changed significantly since 1998. Leading up to the St Andrew?s Agreement of 2006, Northern Ireland had been under direct rule from Westminster after the assembly was suspended in 2002. From 1998 until 2002 the Ulster Unionist Party had been the largest party with David Trimble taking the post of First Minister and the SDLP?s Seamus Mallon was deputy First Minister, later changing to Mark Durkan. Since 2007 there has been a dramatic shift in politics and the DUP and Sinn Fein have emerged as the biggest parties. Peter Robinson The number of UUP MLAs has decreased from 28 in 1998 to 16 today, the SDLP has also seen the number of their MLAs decrease from 24 to 12. ...read more.

However, they didn?t have the numbers for a veto. The use of the D?hondt system to select ministers is another way in which the DUP and Sinn Fein dominate. The system was devised by a Belgian lawyer in the 19th century, and ministerial seats are allocated based on highest averages. It was devised for countries which have an executive consisting of many parties with different ideas. In the previous assembly the DUP had 5 ministers and Sinn Fein had four, compared to Alliance who got two and the SDLP and UUP who got one each (Environment and Regional Development, respectively). It used to be that under the Good Friday Agreement the minister had the final say on issues relating to his department, meaning that the other parties still had considerable power over their departments, but St Andrew?s changed this and it means that Sinn Fein and the DUP can still dominate because they will have the majority of members in the statutory committees. On the other hand, the alternative view is that a plurality of parties will continue to operate in Northern Ireland as the growth in support for the DUP and Sinn Fein will peak and perhaps even decline. The 2016 elections saw a rise in the amount of MLAs that did not designate themselves as Unionist or Nationalist, including 8 Alliance, 2 Green and 2 People Before Profit. ...read more.

There have been good examples of where legislation has the support of both communities in Northern Ireland. For example, the Taxi Bill that was introduced in 2007/08 by Arlene Foster DUP, who was the Minister for Environment, was supported by MLAs from all sides. It regulated the taxi industry; taxis for example must be registered and licensed. This proves that the DUP and Sinn don?t totally dominate legislation, at least on non-contentious issues. Finally, it could be argued that politics in Northern Ireland is not entirely dominated by two parties because the secretary of state, currently Theresa Villiers, has overall responsibility for the Northern Ireland Office, advances UK government interests in Northern Ireland and represents Northern Ireland interests in the Cabinet. This proves that the DUP and Sinn Fein aren?t totally dominant because there are still issues over which the executive has no control such as financial markets and national minimal wage. To conclude, the arguments presented above show that the two largest powers have the most power in the executive and this means they can dominate what legislation actually makes it through to the assembly. As long as the DUP and Sinn Fein can remain the leading parties in their respective communities, their domination could continue for a generation. The proposed reduction in Westminster constituencies which is due to take place by the 2020 general election would also strengthen the DUP and Sinn Fein at the expense of the smaller parties. The true effects of this are yet to be seen. ...read more.