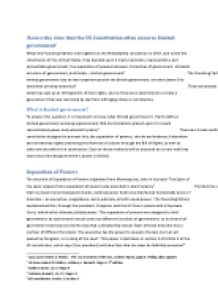 Assess the view that the US Constitution often ensures limited government

This means that if a person was perhaps unfairly convicted of an offence, or given to harsh a punishment, the president can withdraw this conviction, limiting the power of the judiciary. On the other hand though, it means that the president can effectively play the role of the courts, in letting someone off their crimes. Checks by the legislature One of the major limitations that Congress can exercise on the Executive is through the aforementioned power of the purse. Any money that the president wants to spend on his policies must be voted for by Congress. If congress does not want the president to enforce these policies, they can simply deny him the money, therefore limiting what he can do. One example where Congress has used this power to limit the power of the executive was in the Foreign Assistance Act of 1974, which eliminated aid and military funding for South Vietnam, subsequently ending the Vietnam War[15]. A further check that Congress has on the President is the power to declare war. Although the President is said to be limited in domestic policy, but not so much foreign policy[16], it is Congress that decides whether to send troops into hostile situations. This means that the President cannot wage war on any country he likes, despite his ?Commander-in-chief? status bestowed upon him by the constitution. Additionally, he must seek the consent of the Senate when making treaties, which requires two thirds of the Senators to agree. In 1999, the Senate rejected the Comprehensive Test Ban Treaty[17]. ...read more.

This Bill of Rights clearly limits the power of government, as it is a list of 10 fairly broad rules, some more than others, which says what the government cannot do, and gives the people more freedoms and rights. However, there have been situations where the Bill of Rights has not been upheld. During the Second World War, Japanese Americans were imprisoned without trial, a clear violation of the 6th amendment. The Patriot Act, passed in 2001, which was in direct response to the 9/11 attacks, was anti-terrorist legislation that allowed measures such as wire-tapping and electronic surveillance, and is a possible violation of the 4th amendment, which guarantees freedom from unreasonable searches and seizures of persons and property. Guantanamo bay, which detains prisoners without trial is a violation of the 5th amendment. This demonstrates that the Bill of Rights does not fully limit government; however it does a great deal to limit government. Conclusion The US constitution has many safeguards to make the government as limited in its power as possible. The separation of powers, the checks and balances between branches, the federal system the US employs, and the Bill of Rights all are designed to limit government. None of these increase the power of government, and all of them do a good job at limiting government power, shown by the fact that over the last 200 years, there have been only a few cases where the government has gone past the power that the constitution has given it. Therefore, the view that the US constitution often ensures limited government is an accurate one, as it does, most of the time, limit what the government can do. ...read more.