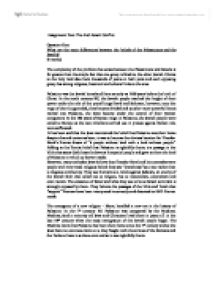 Assignment Two: The Arab Israeli Conflict Question One:What are the main differences between the beliefs of the Palestinians and the Israelis?

Assignment Two: The Arab Israeli Conflict Question One: What are the main differences between the beliefs of the Palestinians and the Israelis? (5 marks) The complexity of the problem that exists between the Palestinians and Israelis is far greater than the simple fact that one group is Muslim, the other Jewish. Claims to the holy land date back thousands of years on both parts and each opposing group has strong religious, historical and cultural links to the area. Palestine was the Jewish homeland from as early as 1500 years before the birth of Christ. In the tenth century BC, the Jewish people reached the height of their power under the rule of the proud kings David and Solomon, however, once the reign of their kings ended, they became divided and as other more powerful forces moved into Palestine, the Jews became under the control of their Roman conquerors. In the 193 years of Roman reign in Palestine, the Jewish people were exiled to Europe as the two rebellions carried out in protest against Roman rule were suffocated. It has been said that the Jews maintained the belief that Palestine was their home despite this and centuries later, it was to become the obvious location for Theodor Herzl's Zionist dream of "a people without land with a land without people". ...read more.

Muslims believe that the rock in the domes centre is where Muhammad ascended through the heavens to God; where he spoke with and was consulted by Moses and where the obligatory prayers were prescribed. For this reason it is a very holy and special site to the Muslim people. Jews believe the same rock to be where Abraham almost sacrificed his son Isaac and where the inner most chamber of the Jewish Temple was situated. For these reasons, Jerusalem is very important to both the Jews and the Muslims. Under the UN partition plan, the city of Jerusalem was to be an international zone. Today, though it is not internationally recognized as such, Jerusalem is the Israeli capital. In order for Palestine to become the Jewish homeland, the problem of the 1.5 million Arab's that presently lived in Palestine had to be addressed. In 1967 Israeli General Dayan expressed how the Jewish people viewed the situation of the Palestinian refugees "We want to have a Jewish state. We can absorb the Arabs, but then it won't be the same country." Whilst promoting the ideal of a Jewish haven, a land of peace, prosperity and contentment, the Israeli government had been executing laws bordering on neo-fascism. ...read more.

Rabin was assassinated by an Israeli extremist who disagreed with any agreement that involved losing part of Israel. Whilst hundreds of Israeli's and Palestinians celebrated this opportunity for peace, it is quite clear that others saw it as a betrayal of the Zionist Israel that was promised to them. There are also differences within the Palestinian people. Whilst some groups refuse to recognise Israel's right to exist and call incessantly for its destruction, others realise that Israel and the Jewish people have become part of Palestine whether they like it or not and if peace is to ensue, compromises must be made. An example of this is the PLO, who under Arafat became known as an anti-terrorist group that wanted to work with Israel to achieve peace. Hamas on the other hand, an extremist group who have carried out over fifty attacks on the Israeli nation in the last five years see Fatah or the PLO as traitors of the Palestinian cause. The problem is indeed far more complicated than one group being Muslim the other Jewish. The differences between the Palestinians and the Israelis are complicated and deeply rooted. If peace is to achieved, both sides must come to a compromise and understand that they're not so different from each other. Question 2 ...read more.