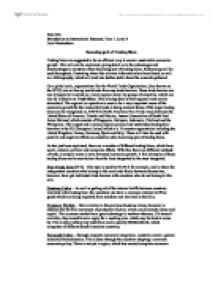 Peter Hill Introduction to International Business, Year 1, Level 4 Luiz Montanheiro Becoming part of Trading Blocs Trading blocs are suggested to be an efficient way to create a sustainable economic growth. This will now be explained, giving detail as to the advantages and disadvantages to countries when becoming part of trading blocs. Referencing will be used throughout; illustrating where the relevant information has been found, as well as a Bibliography, which will lead into further detail about the research gathered. On a global scale, organisations like the World Trade Organisation, (also known as the WTO) aim to free up world trade from any trade barriers. These trade barriers are also trying to be lowered on a more regional scale, by groups of countries, which can also be looked at as Trade Blocs. This is being done so that regional trade can be stimulated. The regional co-operation is seen to be a very important cause of the economic growth for the reason that trade is being created. Some of the larger trading blocs can be recognised as, NAFTA (North American Free Trade Area) ...read more.

This can also be bad however, for the simple reason that the company (as previously stated), will become uncompetitive in the internal market. This has a disadvantage to the country as home-grown companies are failing to succeed in their domestic markets, in some cases being left failing to survive. Before entering a trade bloc, a country has to weigh up the pros and cons between, the disadvantage of the costs of opening its own market to more foreign competition and the advantages that would be gained from getting better access to the blocs preferred market. The gain of this access would always be greater than any disadvantage, so countries would always put forward an application for an existing bloc. The member countries of the bloc have got to consider their personal advantages against their disadvantages of the acceptance or rejection of the new member. When deciding this, the gains from getting access to the new members market are compared with the losses from sharing its original market with the proposed new member. If the bloc in talks with the prospective new member is small, then the benefits will outweigh the disadvantages therefore are willing to accept the new country for membership. ...read more.

There is also an argument, which recommends that we should join it. This is to help attract more investment and customers from elsewhere. This is going to be easier if we are doing business in their currency and not if we're asking them to use our fluctuating exchange rate. In conclusion, there are both negative and positive effects on countries when joining a trading bloc. These points have been put forward, with the use of examples to strengthen the theory. Before becoming a member, both, the member countries and the actual country in hand has got to weigh the pros and cons to find out as to what is going to be most beneficial to them, in relation to what each are going to get out of the situation. This may take a long time, and the waiting list may be between a few countries at any given period. At this moment in time, Turkey is waiting to see if they are going to become the most recent member of the EU. I feel that overall, a country hasn't got anything to lose when wanting to join a trading bloc as the benefits would be much greater than if they decided against it. ...read more.