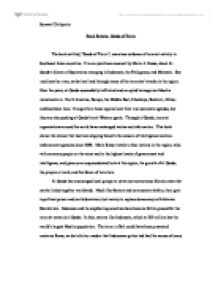 Book Review: Seeds of Terror The book entitled, "Seeds of Terror", examines evidence of terrorist activity in Southeast Asian countries. It is an eyewitness account by Maria A. Ressa, about Al-Qaeda's Center of Operations emerging in Indonesia, the Philippines, and Malaysia. She recollects her own, as she has lived through many of the terrorists' attacks in the region. Over the years, al-Qaeda successfully infiltrated and co-opted homegrown Muslim movements in: North America, Europe, the Middle East, Chechnya, Kashmir, Africa, and Southeast Asia. Groups from these regions have their own domestic agendas, but they are also pushing al-Qaeda's anti-Western goals. Through al-Qaeda, terrorist organizations around the world have exchanged tactics and information. This book shows the silence that has been slipping beneath the sensors of intelligence and law-enforcement agencies since 1988. Maria Ressa travels to four nations in the region, talks with common people on the street and in the highest levels of government and intelligence, and gives us an unprecedented look at the region, the growth of al Qaeda, the players at work, and the future of terrorism. Al-Qaeda has encouraged local groups to carve out autonomous Islamic areas that can be linked together worldwide. ...read more.

KSM said Moussaoui used the money he was given for flight training to buy ammonium nitrate. Ammonium nitrate, a fertilizer easily turned into explosives, had been present in the 1993 World Trade Center attack. Yazid Sufaat, a U.S. educated biochemist and former Malaysian army captain, is the deputy for al Qaeda's fifth division and owned a company called, Green Laboratory Medicine. The 1987 biochemistry graduate of Cal State Sacramento was developing biological weapons for al-Qaeda. This may be why Moussaoui was interested in learning how to fly crop dusters. Fortunately, Sufaat could not buy the right strain of anthrax that could be dispersed as a weapon. Though the world's attention was focused on Afghanistan and Pakistan, she predicted that the next major battleground would be to their south and east, in Indonesia, the Philippines, Malaysia, and other countries where al-Qaeda was busily setting up its training camps and financial networks, where it had already been active for years. Even then, al-Qaeda members in the Philippines were planning what would become the 9/11 attacks, carried out because their discovery in 1995 had been ignored by authorities around the world. ...read more.

The other caches however, have not been found. Maria Ressa documents how every terrorist attack since 1993, including 9/11, has had a connection to the Philippines. She mentions the impact that United States Special Forces had on the fight against the ASG and the Moro Islamic Liberation Front (MILF) in 2001. She believes that U.S. forces and the Armed Forces of the Philippines were unable to eliminate those terrorist threats because of politics and policies. Her background as an expert on the workings of Southeast Asian terrorist networks helps her understand the nature of unconventional warfare and counterinsurgency, and the importance of intelligence and link analysis. Using Southeast Asia as a focal point, it becomes evident that al-Qaeda used the same tactics to recruit, train, and mobilize thousands of Islamic fighters all over the world. Above all, the author has seen how al-Qaeda's tactics are shifting under the pressures of the war on terror. The network is now tangling itself in local conflicts, establishing Muslim independence movements wherever they can be found, and helping local "revolutionaries" to fund, plan and execute sinister attacks against their neighbors, and the West (Ressa 205). Thanks to classified investigative documents uncovered by Ressa, many of those plans have already been discovered and revealed. ?? ?? ?? ?? Sumant Chittiprolu ...read more.