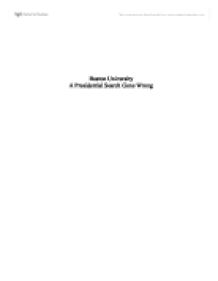 Boston University A Presidential Search Gone Wrong TABLE OF CONTENTS I Introduction History of the Presidential Search at Boston University II Accountability a) The Role of the President and Board of Trustees b) The Role of the Faculty III Interconnections A Look to the Future and Steps to Ensure Fair Searches III Conclusion Selected Bibliography INTRODUCTION Leadership is defined to a large part by the people affected who thus agree, share visions, interpret measures and participate directly or indirectly in leading an institution. Since every institution has a different structure, there is a limit to what can be known. Within academic institutions the "making" of a president is not a clear-cut process and the case of the presidential search at Boston University has brought up several issues concerning the role of the president and university trustees. The president of an academic institution rules under the concept of shared governance where the president is the administrative officer of the Board of Trustees as well as the head of the faculty. When universities look for a president, hopes are high and often unreal to find a person who can equally represent the interests of the faculty, staff, board of trustees, state and federal legislators and alumni. Boston University has had a tumultuous and ill-fated search that shows in retrospect a system that highlights the complexities of leadership and exposed a board of trustees that was polarized and politicized and did not function in the interest of the campus community. In this paper my focus will be on the history and facts of the presidential search at Boston University, the practice of presidential searches in general, the role of the trustees, as well as leadership in higher education. ...read more.

The role of the president is ambiguous and Richard Chait defines good leadership as "not [being] controlled by the center". He emphasizes visionary organizations with "a strong internal culture" (Richard Chait 41) over visionary leaders who rule autocratically. The emphasis is on shared leadership with the president functioning as one part of a whole. The increasingly complex dynamics of organizational leadership "emphasizes that leadership involves interdependencies between roles and that roles change over time." (Birnbaum 119). A good president often works behind the scenes and relies heavily on his 'followers'. In higher education these followers are the faculty and staff who believe in the importance of what their institution does. Often they lead themselves, for example as department chairs, and know how to take initiative, have high performance standards and are effective as followers as well as leaders. Followers who take initiatives and effectively carry them out do much of the work at a university. Increased diversity of leadership that is dispersed leadership on an interdependent level that involves people who passionately pool ideas and create solutions is seen as a successful model in the academic environment. Boston University's outgoing president John Silber was a successful visionary who "transformed what had been a commuter school into the nation's fourth-largest university" (Sara Rimer) yet his style was autocratic, which alienated a large part of the campus community. Thus, in his 25 years as president, Silber built Boston University into a nationally prominent institution yet over time consolidated the kind of power and influence that became synonymous for "the controlling center". ...read more.

The growing trend to create special Web sites is not welcomed by all since it can create problems for candidates who do not want their home institution to know about their application and fear they might be seen as disloyal. Some think that losing secrecy can have the impact of losing good candidates. Opinions differ, however, and the example of the University of Tennessee at Knoxville has proven to be very positive. Their website is interactive, posting the names of the search committee members and presidential applicants, asking the public for nominations and suggestions, listing the outline of the search plan and posting additional information as it becomes available. Whether or not presidential searches should be secret, partially secret or public, in the case of Boston University it is safe to say that an open search could have lessened the disastrous and costly result. CONCLUSION What might be the most obvious outcome of the scandal is that it points to the significance and importance of an independent board and that recent scandals in the corporate world are reflected also in the academic world, which is not immune to the problems of cronyism and exaggerated 'executive salaries'. There is a positive force taking shape presently that examines the various control mechanisms that have been bypassed by the board at Boston University. Looking at Julius' "Rules and Tactics for the 'Change-Oriented'", building a committee to oversee a university's political process is desirable in order to end confusion among faculty and administrators. The website of the faculty, which is open to the public, is a positive a step in the direction of interdependence. If administrators join and add information - thus interconnect - Boston University has a chance to 'reform' itself into an independent, well-run university. ...read more.