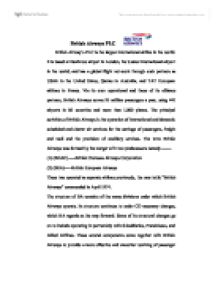 British Airways PLC British Airway's PLC is the largest international airline in the world. It is based at Heathrow airport in London, the busiest international airport in the world, and has a global flight net-work through such partners as USAir in the United States, Qantas in Australia, and TAT European airlines in France. Via its own operational and those of its alliance partners, British Airways serves 95 million passengers a year, using 441 airports in 86 countries and more than 1,000 planes. The principal activities of British Airways is the operation of international and domestic scheduled and charter air services for the carriage of passengers, freight and mail and the provision of ancillary services. The term British Airways was formed by the merger of it two predecessors namely------- (1) (BOAC)-----British Overseas Airways Corporation (2) (BEA)-----British European Airways These two operated as separate airlines previously, the new tattle "British Airways" commended in April 1974. The structure of BA consists of the many divisions under which British Airways operate. Its structure continues to under CO necessary changes, which BA regards as the way forward. Some of its structural changes go on to include operating in partnership with Subsidiaries, Franchisees, and Allied Airlines. ...read more.

The Boeing fleet are based at Heathrow; so also was British Airways (European) smaller fleet as BA (European) flights expanded so successfully. Their fleet was reallocated from Heathrow to Gatwick Airport, Theirs was not the only fleet transferred from Heathrow to Gatwick. The procedure here is that as British Airways traffic continued to expand, larger aircraft were allocated to the Gatwick operation. So also was BA's (European) fleet transferred to Gatwick, as their range of destinations increased. Because of the increasing demand for flights, the government should respond positively to the need of additional runway capacity, which would in turn, enable British Airways to expand our ever increasing fleet. British Airway's fleet will very in size and capacity, depending on passenger demands. Their destination from British Airports depends on whether they are: A) ----Long haul flights, or B) ----Medium-haul aircraft flights. By way of example, British European airlines operate at European routes, while BA's regional airline fleet run services from regional airport: Birmingham, Manchester, and Glasgow, (Boeing 737-236s). One of the British long-Haul service Boeing 757s or 767s operate services to New York. The efficiency of the Airports from which British Airways operate, must also be here taken into consideration, even if in brief. ...read more.

British Airways having weathered the previous economic downturn and emerging in much better shape than most airlines has been able to use this experience to prepare for the current one by implementing a range of cost-cutting measures to adapt to the changing circumstances and which are now having a significant impact on the airline and its fleet plants. These plans and strategies are also being shaped by the removal of barriers to world trade though deregulation, and increasing access to new markets. These factors have brought about the strategies which are now shaping British Airways for the rears ahead. Firstly, a major cost saving Business Efficiency Programme has been underway for some time, which has enabled the airline to remain to profitable by delivering savings that are targeted to reach �1bn per year by 2001. Secondly, product improvements have included the World Traveller re-launch in 1998 followed by a Club World upgrade including fully flat beds, and improvements to first class and Concorde, plus an on-going drive to improve the basic service standards which passengers expect, such as good punctuality and baggage delivery performance. The airline is also concentrating on attracting more high-yielding premium-fare passengers and operating the routes which maximise profitability. Other significant strategies include a major revision of the airline's fleet plans and further development of its partnerships and alliances. ...read more.