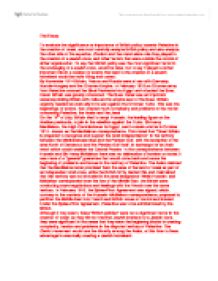 The Essay To evaluate the significance or importance of British policy towards Palestine in the creation of Israel, one must carefully analyze British policy and also analyze, the other side of the equation, Zionism and the stand alone role they played in the creation of a Jewish state, and other factors that were outside the control of either organization. To say that British policy was the most significant factor in the envisaging of a Jewish state, would be false, but to say it played a rather important role in a catalyst of events that lead to the creation of a Jewish homeland would be more fitting and correct. By November 1914 Britain, France and Russia were at war with Germany, Austria-Hungary and the Ottoman Empire. In February 1915 an Ottoman army from Palestine crossed the Sinai Peninsula into Egypt and attacked the Suez Canal. Britain was greatly concerned. The Suez Canal was an important waterway linking Britain with India and its empire east of the Suez. Britain urgently needed an Arab ally in its war against the Ottoman Turks. This was the beginnings of events, that created much complexity and problems in the matter concerning Palestine, the Arabs and the Jews. On the 14th of July, Britain tried to tempt Hussein, the leading figure on the Arabian peninsula, to join in the rebellion against the Turks. Sir Henry MacMahon, the High Commissioner for Egypt, sent Hussein a letter in October 1914 - known as the MacMahon correspondence. ...read more.

The main event that occurred during Britain's occupation (policy), and was a sign of how significant British policy was towards the creation of a Jewish homeland, was the creation of a Jewish "state" within a state . The British had authorized the establishment of the Jewish Agency to represent, lead, and negotiate on behalf of the Jewish settler community in Palestine on all aspects of British policy. In turn, the Jewish Agency established various social (Hebrew university), economic and political agencies (National Council), institutions, and organizations-including military and intelligence. These organizations were the nucleus of an emerging autonomous Jewish political authority within the Palestine Mandate government, and show that Britain's Mandate policy was quite significant in the creation of Israel, as it lay down the structural foundation for a Jewish state, i.e. the Jewish Agency was like a small provisional government. The next few polices Britain was to draw up, collectively caused the beginning of world sympathy towards the Jews and strengthening the ideology of a Jewish homeland in Zion. As historians, Ahron Bregman and Jihan el-Tahri note in there book, The Fifty Year War : Israel and the Arabs, "to fair-minded observers, Britain seemed to be adding to the horrors that the Jews in Europe had suffered. The view that the Jews had a right to a state of their own in their ancient homeland gained ground." One of the fist policies to start off sympathy for the Jews was the Peel Report. The Peel Report concluded that the only solution to the growing problem, in Palestine was to partition Palestine into a small Jewish state ...read more.

The British were still the rulers, but in fear" The aim of such Jewish resistance was to help accelerate the establishment of a Jewish state and drive out the Arabs and British. The next most significant event that occurred, to help create the Jewish state was the Holocaust caused by the Germans. World wide horror and revulsion towards the Holocaust created international sympathy for Zionist plans for a Jewish state in Palestine. Many governments felt a Jewish state might prevent further outbreaks of anti-semitism in Europe. This was a major event that lead to the creation of Israel, because in the eyes of world politics, the Jews needed a state of their own. The Zionist movement had also gained to influence key figures at that time in history. Zionist influence over US President Harry Truman increased in 1945 and created it spread sympathy for the Jewish cause among other key American politicians. This lead to America pressuring and pushing for a Jewish state. Finally, the Zionist movement was to receive there greatest win, in securing the votes of the UN. The Jewish delegation used some very unorthodox methods in convincing the undecided nations to vote in favor of partition . They succeeded in making the Jewish state legal and recognized by the world, as an independent state. In conclusion, the British played a significant/fundamental role towards Palestine in the creation of Israel, but was not the only player in the establishment of a Jewish state. Other factors and events played crucial roles in creating a Jewish homeland. British policy was part of a catalyst of events, situations and people that lead to the creation of Israel. ...read more.