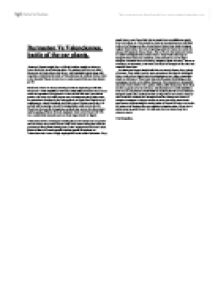 Burnaston Vs Valenciennes, battle of the car plants.

Burnaston Vs Valenciennes, battle of the car plants. Bosses at Toyota tonight face a difficult decision tonight at where to locate their new manufacturing plant. The options they have are either Burnaston in Derby where they have a well-established plant along with experience workers or the town of Valencieennes in northern France. Here at the financial Times we have had a debate about which one they should go for. Burnaston: There are many advantages of them expanding on this site. They have a well-established work force with skilled labourers and a lot of room for expansion. They produce a total of 200 000 cars a year which provide 5% of the U.K with Toyota cars. Unfortunately they will receive no government funding for the extra project, as Derby has a high level of employment. ...read more.

Valenciennes: The advantages of basing they new factory here are greater than in Derby. They would receive 10% of the total factory price from the government along with waiving some of the employment taxes for a fixed period of time and would provide training grants for workers, as Valenciennes is a town of high employment levels unlike Burnaston. They would have a new Green field site but would have no utilities so would have to lay them on. They would be close by to motorways and rail links to the rest of Europe and the channel tunnel where they would transport engines from Derby. The idea of opening a plant in France is to raise the amount of Toyotas in France from 1.1% to 5% of a few years as it would be easier to transport them around France. ...read more.

They would also receive grants for training, as the unemployed would not be skilled labourers. They would have substantial amounts of taxes waived for a period of time unlike Burnaston where they receive no grants or be let off taxes. Also Burnaston is a well established base and are not pushed to their limits so another plant is not necessary as transport costs to the continent would be high where as in France they are close to all EU countries and transport from the factory so it would be cheaper to transport. If Toyota choose to move here they would make more money by increasing the market sales of Toyota in France and on the EU where as in England they are unlikely to improve sales. There fore it makes sense to go to France. We will soon find out where they have chosen to move. Paul Moynihan. ...read more.