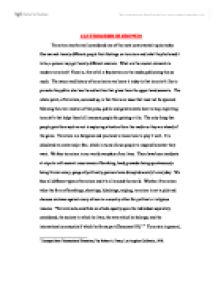 Can Terrorism Be Stopped?

CAN TERRORISM BE STOPPED? Terrorism may be well considered one of the most controversial topics today. One can ask twenty different people their feelings on terrorism and what they believed it to be; a person may get twenty different answers. What are the crucial elements in modern terrorism? There is, first of all a fascination on the media publicizing this so much. The nature and history of terrorism as we know it today is that terrorist's like to provoke the public who has the authorities that gives them the upper hand scenario. The whole point, of terrorism, summed up, is that this is an issue that must not be ignored. Meaning the over reaction of the press, public and governments have to stop exploiting terrorist's that helps them kill innocent people for gaining a title. The only thing that people gain from such an act is capturing attention from the media so they are ahead of the game. Terrorism is a ballgame and you have to know how to play it well. It is calculated to create major fear, which in turns allows people to respond however they want. We face terrorism in our world everyday of our lives. There have been incidents at airports with several occurrences of bombing, hand grenades being spontaneously being thrown away; gangs of politically gunmen have disrupted society's everyday. We face all different types of terrorism and it's all around the world. Whether if terrorism takes the form of bombings, shootings, hijackings, sniping, terrorism is not a pick and chooses violence against every citizen in a country either for political or religious reasons. ...read more.

and many others have absorbed an important less on the media. An example to justify this statement is when the Baader-meinhof gang kidnapped a West German politician in Feb, 1975, to force the release from prison on television. The German TV network was in effect, hi jacked and made an agreement to the crime. While terrorists may kill, the primary objective of terrorism is not mass murder. Terrorists want many people watching not a lot of people dead. Would the violence decline if television ignored or downplayed it? Does terrorism provoke political terrorism? Is it the public's right-to-know absolute? Is the TVs right to report absolute information, or does it has responsibility for what they say? Are there positive steps TV can d to minimize its exploitation by terrorist? If you observe, carefully, terrorist's incidents go way back t newspapers, news broadcasts, tabloids, magazines movies, political cartoons, and internet. Its like a social pornography" because caters too the gossiping, wanting to know the needs of public. Dr, David Hubbard who is a psychiatrist has been through many experiences with terrorism. He states that is TV brought its coverage down to level where it has a relationship to the importance of the event that world terrorism will decrease. The media and terrorist's are best friends. The solutions that television news organizations (local and national) should minimize the "how-to" aspects of terrorists acts to prevent it being repeated again, downplay or even don't state the names of the terrorist's or groups, to limit live coverage of kidnappings, skyjacking, and other crimes involving hostages, give proper message to barbarous actions being made, emphasize stats and provide documentaries and thoughtful analysis. ...read more.

Psychologists have worked with victims or terrorism in Israel, Latin America, and the United States. Peacekeeping and the UN, to prevent chaos. Anarchy was breaking out when the Taliban withdrew, and Afghanistan's government and the international community agreed to some kind of international military presence was needed to build security. In December 2001, the UN sponsored a meeting to meet with Afghan political leaders in Bonn, Germany and establish a force around Kabul. The U.N security Assistance Force was sent to Kabul to protect their city. This is how the U.N works and is trying to involve every country for peacekeeping within our world. If everyone is involved in this, it potentially can limit terrorism. In conclusion, the solution to darkness lies in the bringing of the light. The solution to crime lies in creating an insurmountable strength of harmony, positivism and coherence in the world consciousness. It begins with us to embrace peace and use the human mind to enliven the intelligence at the basis at nature and generate waves throughout everyone. How serious is the problem of terrorism and how far should the governments being prepared to go in dealing with it? What causes terrorism, and what is feeding its growth? Is terrorism morally justified? What does this tell you about the moral state of society, generally? All these issues are examined and addressed throughout this essay. The whole point of terrorism, in short, is that it must not be ignored, and in that sense the overreaction of the press, public and governments. If this is an age of terror, then it has become all the more important of understanding terrorism now. ...read more.