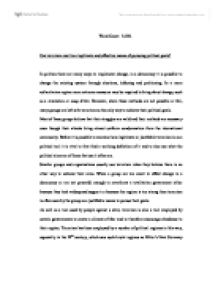 Can terrorism ever be a legitimate and effective means of pursuing political goals?

Word Count 3,100. Can terrorism ever be a legitimate and effective means of pursuing political goals? In politics there are many ways to implement change, in a democracy it is possible to change the existing system through elections, lobbying and petitioning. In a more authoritarian regime more extreme measures may be required to bring about change, such as a revolution or coup d'etat. However, when these methods are not possible or fail, many groups are left with terrorism as the only way to achieve their political goals. Most of these groups believe that their struggles are valid and their methods are necessary even though their attacks bring almost uniform condemnation from the international community. Before it is possible to examine how legitimate or justifiable terrorism is as a political tool it is vital to first find a working definition of it and to also see what the political aims are of those that use it often are. Smaller groups and organizations usually use terrorism when they believe there is no other way to achieve their aims. When a group are too small to effect change in a democracy or are not powerful enough to overthrow a totalitarian government either because they lack widespread support or because the regime is too strong then terrorism is often seen by the group as a justifiable means to pursue their goals. As well as a tool used by people against a state, terrorism is also a tool employed by certain governments to create a climate of fear and to therefore encourage obedience to their regime. Terrorism has been employed by a number of political regimes in this way, especially in the 20th century, which saw such brutal regimes as Hitler's Nazi Germany and the Soviet Union under Joseph Stalin. ...read more.

There finances were extremely secured thanks to Bin Laden's wealth and their successful drug trade in Afghanistan and Al-Qaeda also had their own private militia, the oppressive fundamental Islam rulers of Afghanistan, the Taliban. It would no less despicable but perhaps more understandable if Al-Qaeda had remained active solely in the Middle East. However, it is their eagerness to attack countries thousands of miles away and their involvements in Islamic conflicts in countries like Bosnia, Kosovo, Chechnya, Algeria, Somalia and Sudan that make them seem even more detestable. As a group originally formed to fight an invading force they have evolved into a global organization intent on destroying the west and most of the Middle East. Their belief that they are legitimate soldiers (they declared war on the US in 1996) does nothing for the validity of their methods as their primary targets seem to be civilians, be they business people in New York or tourists in Bali. Therefore Al-Qaeda does seem to be a good case for the illegitimacy of terrorism. Their objectives seem impossible, such as waging war or 'jihad' against America (even an attack on the scale of 9/11 does nothing to damage a superpower of over 275 million people), and are carrying out painstakingly planned attacks on civilians. They could argue that their methods are the only way to achieve their aims but the mass murder of thousands of civilians does little to support the legitimacy of their claims. All terrorists believe that they are fighting for a just cause and that it is a lack of resources that force them to use terrorist methods. ...read more.

What all of them share is a willingness to sacrifice civilian lives for their causes. However, terrorism can never be a legitimate tool of political change even though sometimes it can be an effective one. The very nature of terrorism itself prevents it from being a legitimate tool. Without getting dragged down into semantics, the very word 'terrorism' denotes illegitimacy. Every writer on the subject who has tried to find his or her own definition of terrorism had labeled it illegitimate. Walter Laqueur labeled it the 'illegitimate use of force to achieve a political objective' and James M. Poland goes on to describe it as 'premeditated, deliberate, systematic murder'. Although in some cases you can appreciate what has driven a certain group to resort to terrorism, whether it is the Sandinistas fighting an authoritarian rule or the Tamil Tigers struggling for recognition in their own country, it is still clear that the tactics used by terrorism only prolong and increase the suffering. Even those groups like the NV are dangerous organizations as the political instability their actions can cause can have devastating effects, such as the assassination of Archduke Franz Ferdinand by the Black Hand that led to WWI. All terrorists have some ethnic, political, social, or religious justification for the acts they commit. To really assess whether or not something is justifiable and legitimate there must be some kind of basis for the justification. However, most terrorist acts seem just as illegitimate whether that judgment is based on international law, or simply most people's sense of morality. Therefore it is fair to say that if an act is considered legitimate, it is not usually considered as terrorism. ...read more.