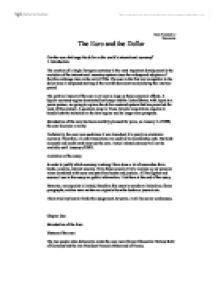 Can the euro challenge the dollar as the world's international currency?

Dima Alexandrov Economics The Euro and the Dollar Can the euro challenge the dollar as the world's international currency? I. Introduction The creation of a single European currency is the most important development in the evolution of the international monetary system since the widespread adoption of flexible exchange rates in the early 1970s. The euro is the first real competitor to the dollar since it surpassed sterling as the world's dominant money during the interwar period. The political impact of the euro is at least as large as these economic effects. A bipolar currency regime dominated by Europe and the United States, with Japan as a junior partner, are going to replace the dollar-centered system that has prevailed for most of this century. A quantum jump in Trans-Atlantic cooperation requires to handle both the transition to the new regime and its longer term prospects. Introduction of the euro has been carefully planned for years, on January 1 of 1999, the euro becomes a reality. Technically, the euro was used since it was launched; it is purely an electronic currency. Therefore, all cash transactions are used by its membership cash. But bank accounts and credit cards may use the euro. Actual minted currency will not be available until January of 2002. Limitation of the essay. In order to justify which currency is strong I have done a lot of researches from books, journals, internet sources. From those sources I try to analyse as my personal views combined with some analysts from books and journals. All the figures and sources I use in this essay are public information. I list them at the end of the essay. However, my capacity is limited, therefore this essay is somehow limited too. Some paragraphs, articles were written as originals from the books or journals etc. I have tried my best to finish this assignment, however, it still has some weaknesses. ...read more.

It binds the countries using it together in a way, which is almost irrevocable, and gives them a vital interest in cooperating more and more closely on economic policy. I. Will it create a super state? The euro brings a European super state a big step closer, but it does not make it inevitable. The only way a single currency can work is by member governments giving up much of their power to set economy policy. They have to hand over the power to set interest rates to the European Central Banks and cooperate very closely on deciding levels of government spending and taxation, so that their economies grow at the same speed. Pooling that amount of economic decision- making goes a long way to creating a single European government. There are still some very large steps to go, though, before the EU becomes the United States of Europe. Firstly, the structure of the EU is still an association of independent nations. The highest authority is the Council, made up of heads of government and ministers from each of the member states. Members of the Council have all been elected- but each by their own people. Secondly, a credible federal state would have to have a coherent foreign policy and its own armed forces. The EU has been trying to develop a Common Foreign and Security Policy but progress has been far slower than on economic cooperation. Some members of the EU, such as Ireland, have historically been neutral, that is they have refused to take sides in major conflicts such as the Second World War and do not belong to NATO, the main western alliance. Can it challenge the dollar? (Please turn to chapter two) Chapter Two Can the euro challenge the dollar as the world's international currency? I. The euro- the new Global Currency. When the euro was first dreamed up in the 1980s, it was not just the hope of further economic integration that was the driving force. ...read more.

The only global currencies today are those of the world's three largest economies and traders: the United States, Germany and Japan. And now the real challenger for the dollar, unquestionable, is the euro. Conclusion. The euro will become another benchmark currency like the dollar. The German mark has weakly filled that role in Europe, but only the dollar has had global economic strength. Now, the emergence of the euro should create somewhat less demand for the dollar internationally. There will be less currency arbitrage and conversion, of course, with fewer currencies around. Currency traders and European banks will therefore lose income. The dollar still plays important role in financial markets but will be at the different level because of the euro. As the euro gears up, it is expected to turn the EMU into a large unified market with clout comparable to the United States. No country or region previously came close. Costs are lower within the 12 member states for tourists and travelers, for foreign companies, and for financial institutions. The hassle and expense of currency conversio0n has obviously been reduced. Price comparisons are easier. Multinational businesses outside of the EMU enjoy the same lower costs of business as native European entities. If the euro is strong enough, investors will diversify their portfolios into euros. But I think the euro needs to establish a good record before investors move into it, because many economists are still point out the euro is still weak compared with the dollar In summary, the creation of the euro is really a big milestone for the early 21st century, the century of globalisation and transition. This is the first currency that can challenge the dollar since it dominated the world's international market. With the launch of euro banknotes and coins less than one year away I believe that the European Central Bank will intervene and boost the euro further. And the euro will still have a lot of obstacles ahead that need time to solve. The new one always meets obstacles- that is the rule of natural law. ...read more.