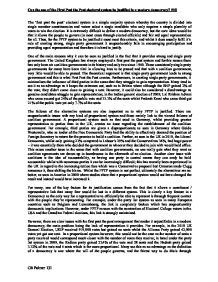 Can the use of the First Past the Post electoral system be justified in a modern democracy?

Can the use of the First Past the Post electoral system be justified in a modern democracy? [50] The 'first past the post' electoral system is a simple majority system whereby the country is divided into single member constituencies and voters select a single candidate who only requires a simple plurality of votes to win the election. It is extremely difficult to define a modern democracy, but the core ideas would be that it allows the people to govern (in most cases through elected officials) and fair and equal representation for all. Thus, for the FPTP system to be justified it must meet this criteria, and whilst it does usually fulfil it's role of creating strong, single party government it unquestionably fails in encouraging participation and providing equal representation and therefore it is hard to justify. One of the main reasons why it can be seen as justified is the fact that it provides strong and single party government. The United Kingdom has always employed a first past the post system and for this reason there has only been six coalition governments in its history and only two since 1940. ...read more.

This is clearly a key feature in a Democracy as the only way for a representative to efficiently be able to represent is through frequent contact with the people they're representing. For example, under the party list system as seen in many European countries such as Belgium and Luxembourg, the link is completely broken which has unquestionably democratic implications. However, under FPTP as seen with the nomination of Electoral College voters in the USA and the Canadian Federal elections, this link is strongly maintained. However, there are clear issues with the first past the post arrangement that render it unjustifiable in a modern democracy; the main problem being the lack of representation it provides. For example, in the 2010 UK General Election, UKIP received 919,000 votes but gained no seats whilst the Alliance Party gained 42,000 votes yet got one seat. In a proportional system however, this would not be the case as the number of seats a party received would correspond much closer with the number of votes they receive; in Israel under the party list system in 2009, the Kadima party gained 22.4% of the vote and 28 seats and the Hadash party gained 3.32% of the vote and 4 seats which is far more proportional. ...read more.

This idea derives from Duverger's law, and economist Jeffrey Sachs states that 'the main reason for America's majoritarian character is the electoral system for Congress'. This can also be clearly seen in the UK where 18 out of the 23 general elections since 1922 have produced a single party majority. Furthermore, the notion that coalition governments are always weak governments is not always the case, as Germany has always had coalition governments yet has managed to push forward social change as well as becoming a major force on the international scene. It is therefore clear that whilst the First Past the Post system succeeds in creating single party governments, this is really the only benefit it has over the other systems, and in some cases as seen in Germany coalition governments can be fruitful. It fails enormously in it's role of representation as smaller parties are clearly marginalized, and a vast proportion of the vote is wasted on these parties which due to the nature of the system are not going to gain any significant power. Therefore, the system is unjustifiable in a modern democracy and whilst the alternatives are not perfect, a number of them are more Democratic than First Past the Post. ?? ?? ?? ?? Oli Palmer 13I ...read more.

In this question, candidates must use their knowledge of First-Past-the-Post and how it operates to both defend and criticise it, before making a judgement about the system, and answering the question of whether it can be justified in modern democracies. ...

In this question, candidates must use their knowledge of First-Past-the-Post and how it operates to both defend and criticise it, before making a judgement about the system, and answering the question of whether it can be justified in modern democracies. There is also the possibility, and this candidate demonstrates it, of bringing in other electoral systems in order to highlight the strengths and weaknesses of First-Past-the-Post by comparing it to the other systems. This candidate's response to the question is strong and well-developed, and shows other students of A Level Politics how an essay should be written.

The level of analysis in this essay is one of its strengths; the frequent use of and variation in examples from political history (the UK, India, Germany, the US, etc.) is impressive and demonstrates that the candidate has an excellent knowledge of politics. However, what makes this essay particularly good is the fact that examples are not simply tacked on to the end of an argument or point. Instead, the candidate makes reference to their example and then goes on to explain why it is relevant and the significance of it in their argument. This is the critical part that gains this candidate access to the top grades, as it shows the examiner that the candidate can adapt and apply their knowledge of politics under pressure. The inclusion of equally-weighted analysis on both the argument and counterargument in this essay allows the candidate to discuss both sides before coming to a conclusion, making for a balanced essay which comes across as well-written.

The candidate shows a mature style of writing which flows well, and uses appropriate and specific vocabulary ("majoritarian system", "Electoral College", for example). There are also no spelling or grammatical issues. The use of a clear structure which introduces the essay, focuses on the argument, then the counterargument before concluding is effective because of its clarity and simplicity. Some prefer to write an argument and then follow it with the counterargument, and both structures are good, but the one this candidate has used can be best under pressure, and is less complicated for the student writing the essay.