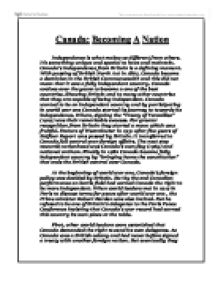 Canada: Becoming A Nation Independence is what makes us different from others. It's something unique and special to have and maintain. Canada's independence from Britain is a defining moment. With passing of British North Act in 1867, Canada became a dominion in the British Commonwealth and this did not mean that it was a fully independent country. Canada evolves over the years to become a one of the best countries. Showing Britain and to many other countries that they are capable of being independent. Canada wanted to be an independent country and by participating in world war one Canada started its journey to towards its independence. Where, signing the "Treaty of Versailles" (1919) was their remarkable success. For greater recognition from Britain they started a move which was fruitful. Statute of Westminster in 1931 after five years of Balfour Report was passed by Britain. It transferred to Canada full control over foreign affairs. The next step towards nationhood was Canada's own flag (1965) ...read more.

So Canada signed the "Treaty of Versailles" as an independent nation and gained a seat in the League of Nation too. In this way Canada grew in status both as a nation and internationally. Although Canada demonstrated its independence in practical matters but it was still legally bound to British Empire. The decisive step in changing Canada's legal status was the Imperial conference of 1926. Where dominions of British Empire including Canada, requested formal recognition of their autonomy. A special committee under the leadership of Lord Balfour represented "Balfour Report". The recommendations of Balfour report were made law in 1931, "Statute of Westminster" by British government. Statue of west minister is an important act; it transferred to Canada full control over foreign affairs, a role previously exercised by Britain. This meant, for example, that in world war two, Canada made its own declaration of war - the declaration by Britain didn't automatically bind Canada. ...read more.

And this helped to strengthen the nationhood. Now there was just one restriction on Canada's independence: it could not reform its constitution. In 1982 by "brining the constitution home", Canada became fully independent. It means that Canada no longer has to ask the British parliament for approval of amendments. This act followed a long period of federal- provincial negotiations. Bringing home the constitution and charter of rights gave a new role to Canada. This represented Canada's last step to true nationhood. By this Canadian received clearer and more lasting protection of our democratic rights and freedom. Now Canada becomes a sovereign state with its constitution at home. Today Canada is an independent nation of more than 30.5 million people. And things had changed in a big way since the 1890's when Canada was mostly controlled by Britain but now Canada has its own flag, national anthem and specially its constitution with all the powers of amending too. No doubt Canada has become a fully independent nation and its identity as a sovereign state is clearly defined in political and social life of Canada. ...read more.