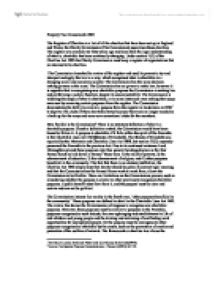 Property Two Coursework 2003 The Register of Charities is a list of all the charities that have been set up in England and Wales; the Charity Commission (The Commission) supervises these charities. The register was created over forty years ago and since then the legal understanding of what is, charitable has been continually changing. Under section 3 (1) of the Charities Act 1993 the Charity Commission must keep a register of organisations that are deemed to be charities. The Commission launched its review of the register and used its powers to try and interpret and apply the law in a way, which recognised what is charitable in a changing social and economic society. The Commission has the same decision making powers as the court. The Commission has no power to make law, however it is arguable that in recognising new charitable purposes the Commission is making law and performing a judicial function, despite its unaccountability. The Commission is widening the scope of what is charitable, or in some instances even making that scope narrower by removing certain purposes from the register. The Commission demonstrated its ability to remove a purpose from the register in its decision in 19931 to deprive rifle clubs of there charitable status because they were no longer needed as a back up for the army and were now recreational clubs for the members. ...read more.

In the judgement of Williams Trustees v IRC3 it was indicated that in deciding whether a trust is charitable it must first be regarded as being in the spirit and intendment of the Preamble and secondly its purpose must be beneficial to the community in a way that is charitable. In Scottish Burial 4, Lord Wilberforce said for something to come within the spirit and intendment of the preamble meant, "it came within the scope and effect of decisions previously made by the court". It will obviously be easier to qualify for charitable status if the purpose falls expressly within the Preamble. In considering whether "promoting inexpensive and sanitary methods of disposal of the dead"5 was charitable the Commission considered that it was in 'the spirit and intendment' 6of certain purposes in the Preamble to the Charitable Uses Act 1601. These purposes include, ' The repair of bridges, ports, havens, causeways, churches, sea banks and highways7'. Allowing them to make it a charitable purpose as they concluded that it could fall under the analogy of other cases dealing with burial, which were seen to be charitable. The Commission is bound by the same approach as the courts8 in looking for an analogy as a necessary step in concluding a purpose produces a charitable benefit to the public. However, the Commission has shown its flexibility in its ability to interpret the Pemsel heads widely to include the new charitable purposes such as 'promotion of urban and rural regeneration', not previously included as a charitable purpose. ...read more.

This shows that the Commission is considering the implications of recent legislation such as the Human Rights Act and its affect on charity law. Even if it thinks it is not applicable, it is willing to consider it and comply with obligations under the convention. This demonstrates the Commissions response to a changing society in light of the Human Rights Act. The Commission must look at how it interprets legal principles to ensure that they are interpreted in a modern society in a way that is compatible with Convention Right In looking to the future and possible reforms of Charities law, there have been calls for a statutory definition of charitable purposes and a new legal structure for charity law. However this review has show the Commission welcoming the lack of statutory definition because it allows them to be flexible as illustrated above, and does not hold back development of charity law. The Commissions ability to recognise new purposes means that the Commission can make decisions without costly litigation or the need for legislation. The review illustrates that the Commission takes a constructive approach to ensure that the Preamble and case law are interpreted in a modern light. The Commission attempts to keep what it Charitable reasonably in line with economic and social conditions. Therefor this review has shown the Commission to be flexible, forward looking and responsive to the changing social and economic needs of society. ...read more.