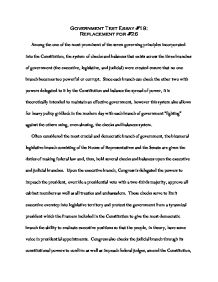 Checks and Balances in the US system

Government Test Essay #19: Replacement for #26 Among the one of the most prominent of the seven governing principles incorporated into the Constitution, the system of checks and balances that exists across the three branches of government (the executive, legislative, and judicial) were created ensure that no one branch becomes too powerful or corrupt. Since each branch can check the other two with powers delegated to it by the Constitution and balance the spread of power, it is theoretically intended to maintain an effective government, however this system also allows for heavy policy gridlock in the modern day with each branch of government "fighting" against the others using, even abusing, the checks and balances system. Often considered the most crucial and democratic branch of government, the bicameral legislative branch consisting of the House of Representatives and the Senate are given the duties of making federal law and, thus, hold several checks and balances upon the executive and judicial branches. Upon the executive branch, Congress is delegated the powers to impeach the president, override a presidential veto with a two-thirds majority, approve all cabinet members as well as all treaties and ambassadors. ...read more.

nation from overbearing or corrupt laws passed by a simple majority of Congress and forces the legislature to reconsider the implications of the bill. Along with the veto power, the executive branch is also able to limit congressional reach since the president is given the title of Commander-and-chief of the military and the Vice President presides as President of the Senate. These appointed titles keep the legislature from fully controlling military activity and gives the executive branch the deciding vote in case of an evenly split Senate vote. According the Constitution, the executive branch is essentially the creator, yet a separate power from, of the judicial branch since executive checks over the judicial branch include the ability to appoint federal judges according to the president's criteria for such judges. This crucial power over the judicial branch ensures that the courts will not intentionally become unjust with its powers. Hence, executive checks are arguably provide most of the President's and cabinets duties in the modern day as it continually oversees congressional policy and federal judges. ...read more.

For example, the journey for a bill to become a law must pass through numerous checks of all three branches in order to be implemented as policy and at any turn, a branch may express its disapproval, including presidential veto, interpreted as unconstitutional, or voted down by the other house of Congress, and possibly compromise its success. Very rarely is policy passed quickly through the governmental system unless one faction holds a majority over the three branches. Comparable to insurance for a just government as set up by the Constitution, the system of checks and balances comes at the cost of diminishing the efficiency of government while gaining worth in protecting the nation against a tyrannical ruling power. Altogether, the system of checks and balances holds a dual duty in protecting a branch's powers from impedance by the other two and monitoring the others use of their powers correctly and efficiently. Despite its righteous intentions, this safety measure also allows for policy gridlock in the modern age and often slows the government to a minimal pace during an era of divided government. ...read more.