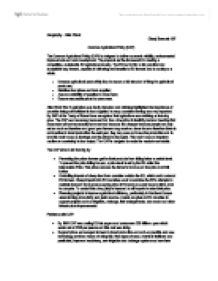 The CAP aims to aid farming by: * Preventing the prices farmers get for their products from falling below a certain level. To prevent the price falling too par, a price level is set by the EU called the Intervention Price. This prices ensures the farmer's income and the price don't fall further. * Controlling imports of cheap food from countries outside the EU, which could undercut EU farmers. Cheap imports into EU countries would undermine the EU's attempts to maintain farmers' income because the price of EU produce would have to fall in order to compete. To control this a levy (tax) is imposed on all imports to raise their price. ...read more.

Storing in intervention warehouses was very expensive, subsidising exports into countries outside the EU (known as dumping) undermines prices being received by that countries farmers and is therefore unpopular. So it is either, given away as foreign aid, fed to livestock or destroyed. * Farmers get unequal benefits depending on the size of their farm. * There is opposition from other countries such as USA and eastern European countries because traffic barriers make it hard to sell their produce in the EU while subsidised EU produce is dumped in their countries undercutting their farmers. * Before the euro, exchange rates resulted in price variation and it was easy to get cheap imports within countries in the EU. * Conservationists are against the CAP because of environmental threats such as new roads being placed etc. ...read more.