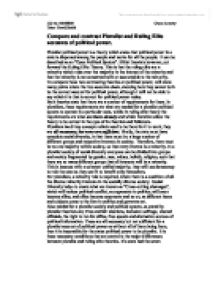 Compare and contrast Pluralist and Ruling Elite accounts of political power. Pluralist political power is a theory which states that political power in a state is dispersed among the people and works for all the people. It can be described as an "Open Political System". Elitist theorists however, put forward the Ruling Elite Theory. This is that the ruling elite are a minority which rules over the majority in the interest of the minority and that the minority is not concerned with or accountable to the minority. To compare these two contrasting theories on political power, will show many points where the two accounts clash, showing how they cannot both be the correct account for political power, although I will not be able to say which it is that is correct for political power today. Both theories state that there are a number of requirements for them. In pluralism, these requirements are what are needed for a pluralist political system to operate in a particular state, whilst in ruling elite theory the requirements are what are there already and which therefore allow the theory to be correct in the eyes of its theorists and followers. Pluralism has 8 key concepts which need to be there for it to work, they are all necessary, but none are sufficient. ...read more.

This means that in the U.S the places of access to political power and decisions etc. is decentralized therefore can be accessed all over. This decentralization however, is not necessary to pluralism. What is necessary is a plurality of political resources, such as the most basic resources of the vote, the right to start an organisation and free and accurate political information. These resources cannot be monopolised by any one group as this would be rule through tyranny by that group. In a pluralist political system decisions cannot be made through substantive consensus, where everyone has to agree on each decision made. This is because of the social diversity and the great variety of interests and groups involved that it is impossible for there to be a total agreement on each decision. Instead they use procedural consensus. This is where instead of agreeing on each decision to be made, they agree on how each decision is made, so that it cannot be argued that it was unfair, because there is a consensus on the procedure for decision making. For these pluralist states, there are two main features which control the decision making. Firstly no single group dominates decision making, it is done through many different small groups exercising power together so that the decisions are not made through tyranny or to be used to advantage only one small group. ...read more.

They say that with this then, it cannot mould public opinion and so no bias will appear as there are so many varieties. They claim that the variety is also there because papers and so on adjust their content to the public or they just would not get any readers or viewers, so they adjust to the public as opposed to the public adjusting to them. Pluralists will also argue that where there is a ruling elite there is a pluralism between them, and so even this stops the tyranny of the ruling elite being effective. They say that although there is a coherence within ruling elites, there is no coherence between ruling elites, as they have to win the elections to become "The" ruling elite. So that means that the ruling elites have to exercise political power fairly and for the people or they would be beaten in the next election. Cox, Andrew. 1985. Power in Capitalist Societies: Theory, Explanations and Cases. New York: Palgrave Macmillan Burch, Martin. 1985. Three Political Systems: A Reader in Politics. Manchester: Manchester University Press Dunleavy, Patrick and O'Leary, Brendan. 1987. Theories of the State: The Politics of Liberal Democracy. New York: Palgrave Macmillan. Holden, Barry. 1993. Understanding Liberal Democracy. London: Prentice Hall Schwarzmentel, J.J. 1987. Structures of Power: An Introduction to Politics. London: Atlantic Books Young, Ralph. 1993. Introducing Government. Manchester: Manchester University Press ?? ?? ?? ?? Lib No. 00548926 Owen Laverty Tutor: David Smith ...read more.