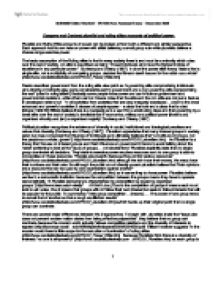 Compare and Contrast pluralist and ruling elites accounts of political power. Pluralist and Ruling Elite accounts of power can be looked at from both a different and similar perspective. Each approach has its own take on power with elitist believing a small group rule while pluralists believe a diverse range exercise power. The basic assumption of the Ruling elites is that in every society there is and must be a minority which rules over the rest of society. An elite is described as being " those individuals who have the highest indices of excellence in any particular power." Dunleavy and O'leary (1987). In short the power elite theory "claims that a single elite, not a multiplicity of competing groups, decides the life-and-death issues for the nation as a whole" (http://www.socialstudieshelp.com/APGOV_Power_Elite.htm) Paerto described government from the ruling elite view point as "a governing elite compromising individuals who directly or indirectly play some considerable part in government and a non governing elite compromising the rest" (cited in ruling elites*) Basically some people have power and can influence government and governmental decisions, while others cannot. Mosca notes that the elite and the non elite are not just a feature in developed nations but "In all societies from societies that are very meagrely ...read more.

IF we look at membership to these groups we can see that pluralism aims to " maximise the freedom and the power of all social groups" (Jones, Bill; Kavanagh, Denis; Moran, Micheal; Norton, Phillip,: 2001). Which is in complete contrast to the elitists are only concerned with their group and its preservation. A ruling elite can only be replaced with another elite so we get the "circulation of elites" Paerto. As pluralists emphasize that "power is not a physical entity which individuals either have or not" (http://www.socialstudieshelp.com /APGOV_Pluralism.htm it means leaders are chosen and created, they can be anybody. Elite members are broadly "born into prominent families" (http://www.socialstudieshelp.com /APGOV_Power_Elite.htm so membership is broadly closed . So while pluralist groups are constantly changing and are open, the elites believe that it is only the elites and new elites who will be able to demonstrate power and be in the influential minority. Elitists pay particular attention to the state as this is the highest "elite" there is, where a pluralists avoid talking about that it exists and think that citizens have no obligation or tie to follow what the state says. They figure that the "mass public controls its governments, and politics have less to do with Parliaments.......and more to do with election, party competition and interest group activity" (http://www.socialstudieshelp.com /APGOV_Pluralism.htm which introduces an important topic; Collaboration vs. ...read more.

Pluralists later realized that citizens do not and cannot directly control policy making in polyarchies, they also state that "many people are neither active nor very interest in politics" which agrees with Dahls quote "man is not a political animal" (both Dunleavy and O'leary: 1987) state that Pluralists often accept sociological functionalist views such as the idea that "societies are becoming increasingly complex.....so....social rules and institutions are progressively more specialised" (http://www.socialstudieshelp.com /APGOV_Pluralism.htm.) Surely if there is an increased specialisation in areas in society this is a form of elitism. Not everyone in any given area will be specialist so some have more knowledge or power than others and thus there is an elite, as those with knowledge have power so we are "dominated" (http://www.socialstudieshelp.com) in some form. The ultimate similarity however is that neo pluralism accepted that there was a "stronger role for government....and [showed an] explicit recognition of the disproportionate power of some groups" (Jones, Bill; Kavanagh, Denis; Moran, Micheal; Norton, Phillip: 2001). Finally Pluralism is closer to the elite way of thinking than first emerges, as "Schumpeter and Dahl [key players in Pluralism]...refashioned pluralism into a theory of elitist democracy" (Dr. Douglas Jaenicke and Prof Michael Moran:2005-2006:Study Sheets). Which synthesizes parts of the 2 approaches to create the term "pluralist elitism". ...read more.