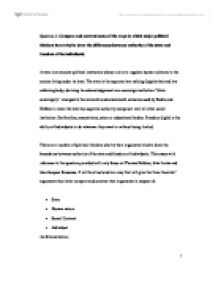 Compare and contrast some of the ways in which major political thinkers have tried to draw the differences between authority of the state and freedom of the individuals.

Question.1: Compare and contrast some of the ways in which major political thinkers have tried to draw the differences between authority of the state and freedom of the individuals. A state is an ancient political institution whose role is to regulate human relations in the society living under its laws. The state is the supreme law making (legislative) and law enforcing body, deriving its acknowledgement as a sovereign institution.' State sovereignty ' emerged in the sixteenth and seventeenth centuries used by Bodin and Hobbes to mean the state has supreme authority and power over all other social institution like families, associations, union or educational bodies. Freedom (right) is the ability of individuals to do whatever they want to without being limited. There are a number of political thinkers who by their arguments tried to draw the boundaries between authority of the state and freedom of individuals. This essay with reference to the question provided will only focus on Thomas Hobbes, John Locke and Jean Jacques Rousseau. It will be structured in a way that will give the three theorists' arguments then latter compare and contrast their arguments in respect of; * State * Human nature * Social Contract * Individual As follows below; THOMAS HOBBES Thomas Hobbes a staunch royalist born in1588 lived mostly with noblemen; it is no wonder he became a friend and amanuensis of Francis Baconi. Due to the English civil war he spent a lot of time in exile. ...read more.

It is due that situation that Locke argued for the need of the political authority to ensure orderly and lawful process that could not be achieved in the state of nature (similar to Hobbes'). But Locke puts it categorically clear that individuals should be prepared before they entrust their liberty to the body (government) so that they willingly more so on majority basis (social contract) and thus the entrusted government should only work for the interest of the citizens that is to say executing their rights of nature as was enjoyed before the formation of civil government. According to Locke the civil state's (political government) authority is subject to the conditions of the trust and that individuals are only obliged to obey the state when it (state) fulfils its contractual conditions as evidenced by 1'.... The authority and power of government is limited by its central under lying purpose - to respect and defend the natural rights of the individual. (such that) ...... if government fails to discharge its responsibilities to its subjects, or abuse those powers in an oppressive or tyrannical manner, or rules without obtaining the consent of the governed, then under all those circumstances the individuals who form civil society may exercise their right of rebellion ...' In other wards to Locke individuals should not be ruled with out consent that is the state has no absolute authority. JEAN- JACQUES ROUSSEAU Rousseau born 1712 in Calvinist Geneva and was destined for the life of an artist. ...read more.

Rousseau on the other hand, emphasizes the general will, to him it's every right, which practically may not be the case because different perceptions of self-interests or groups can occur. So it is quite irrational to strike a balance between the parties involved. Human nature, to Hobbes is egotistic and selfish, in other words self-seeking, to Locke; human nature is rational and moral. In fact to him in the state of nature, men did not live in fear because they treated each other freely and independently, so is Rousseau's argument (human nature-rational). However, Rousseau in the general will ignored the fact that different opinions (interest) exist, that may lead to self-seeking behaviour just like Hobbes. And indeed this is true human nature is selfish. Individuals are possessive (unrestricted pursuit of human goods) implying that their rights are unlimited. So to avoid collision of rights, the civil society is established in which, the civil law will apply. Meaning that freedom will lie in their obedience of the law while the state authority is granted by individuals' consent thus transferring their rights and power . In conclusion, Hobbes, Locke and Rousseau draw the boundary between the state authority and individual freedom, basing on the concept of social contract through which the civil state is established. More so is what (social contract) entrusts the authority to the governed. Individuals who are also obliged to obey the state because they gave it their rights and power for it to offer security. Therefore, individual freedom lies in heir obedience to the civil government. ...read more.