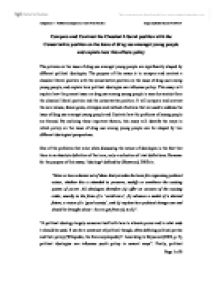 This is very different to the Conservative ideology, which supports the need to protect the good morals and values of the people, because they believe drugs do harm to society. The Conservatives believe in maintaining and supporting the structure of the present society and that by having traditional roles young people will play their part in society, which will give them certainty about their future. They Conservatives also believe that young people should have respect for the laws of society regardless of how unfair it may be . (Cooper, 2006; Heywood, 2003; Liberal vs. Conservative from a Free Market/Freedom Perspective, 2006) Ideologies not only provide a framework of what people believe and understand about the world but also provide a vision of how the world ought to be . For example, people who come from the Classical Liberal ideology, believe the ideal society would be one where the government plays a limited role and does not impose on the individual's natural right to life, liberty and property. The Classical Liberals "profess in the free market, free trade, economic deregulation and the rule of law. (Heywood, 2003; Liberal vs. Conservative from a Free Market/Freedom Perspective, 2006; Wikipedia, the free encyclopedia) The conservatives on the other hand believe the ideal society would be one where history and tradition are respected and maintained. ...read more.

In regards to policy, the Conservatives would support a legislation that enforces harsher penalties because they believe that it will prevent young people from breaking the law again. The Conservatives believe such legislation can be achieved by using force and the restrcition of freedom if the need is required. (Cooper, 2006; Heywood, 2003) In conclusion, the theories that people create about the world, the core values that people hold, and the dreams that people have that they believe would be an ideal society, is strongly influenced by how people respond to social changes, the questions they ask and what they believe would be the best form of action . People who come from the Classical Liberal ideology believe that an individual has the right to do whatever they want so long as they do not cause harm to anyone else or anyone else's property. In relation to drug use, the Classical Liberals believe that if a young person wants to use drugs it is their own free choice and no one should impede on that right. In relation to policy, the Classical Liberals support the legalization of drugs enforcing a harm minimization policy. The Conservatives on the other hand believe that young people who take illegal drugs have no respect for law and order. They believe that illegal drugs are morally corrupting and young people who use them are less likely to contribute society. In relation to policy, the Conservatives support a legislation that enforces harsher drug law penalties enforcing a zero tolerance policy. ...read more.