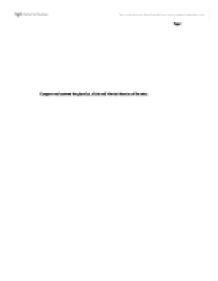 Compare and contrast the pluralist, elitist and Marxist theories of the state.

Compare and contrast the pluralist, elitist and Marxist theories of the state. Pluralism, elitism and Marxism are all theories of power; disparity arises from the ways in which power is measured. In "Power: a radical view" Steven Lukes talks about three dimensions of power, with each following dimension becoming more complicated than the previous one. Pluralism could be portrayed as being one-dimensional in its view of power, in its simplistic account of decision-making. Elitism could be portrayed as being two-dimensional in its outlook on power as it also takes nondecision-making into consideration. Finally, Marxism furthers the elitist's view by declaring that society has economic structures which ensure that certain decisions are never made, so in this way power could be seen in a third-dimension. As the approaches of elitists and Marxists invoke broader considerations these lead to a more obviously ideological account of the state. Dahl defined pluralism simply where "A has power over of B to the extent that he can get B to do something B would not otherwise have done"1. Pluralists view power as being held by a variety of groups in a society, some of which are more powerful than others, and consequently there is a constant struggle for power. Dahl argues that this is so because "power and influence are crudely lumped together". For example, this is based on the assumption that if a man has wealth this means that he also has status, and this status enables him to mobilise popular support. ...read more.

Whilst Pareto saw political power in terms of a rule by elite groups because of their members superior intelligence, education, cunning and so forth, Mosca argued that elite groups ruled politically because of their superior organisational ability. In this latter respect, elites came to power because of their superior internal organisation; they took power in the face of the disorganisation of other elites, the general mass of the population. Both writers saw the general (politically disorganised) mass of the population as being controlled through manipulation, propaganda and the like to serve the interests of powerful elites. More recent elitists include Bachrach and Baratz, who criticise the pluralist account of power as being one-dimensional and too simplistic: "it [pluralism] 'unduly emphasises the importance of initiating, deciding and vetoing' and, as a result, takes 'no account of the fact that power may be, and often is, exercised by confining the scope of decision-making to relatively "safe" issues!" 10. So Bachrach and Baratz came up with what they called a second-dimension of power which "involves examining both decision-making and nondecision-making".11 This two-dimensional view of power underpins the crucial importance of identifying "potential issues which nondecision-making prevents from being actual"12. It is thus concerned with the determination and composition of the political agenda. A good contemporary example of this type of power being exercised was in when the British government gave the British people a chance to have their say if they wanted Europe to be part of the EEC, now EU, in the form of a referendum. ...read more.

"false-consciousness" of power has been criticised by Alan Bradshaw, as Lukes employs the tem to indicate "exercises of power involving a lack of decision", and by implication, "the unconscious may only apply to a lack of decision".16 However he later discusses "the unconscious[ness] in power exercises with reference both to inactivity and activity"17. It becomes apparent that Lukes uses one term of "unconscious" to attack the two-dimensional writers, "before moving to another level of definition in order to admit the possibility of unconscious activity into the argument".18 In conclusion the pluralist, elitist and Marxist theories of the state argue about the way in which power is measured. The pluralist concept of power seems to be the simplest in the way it is merely measured by observing or "behavioural" analysis in decision-making. However, the pluralist concept portrays the most democratic account of the state, indicating the spread of decision making in society. The Elitist theory seems to build on this on-dimensional account of power and also includes the power of nondecision-making. However, as elite groups make the decision-making, and subsequent nondecision-making process, this leads the State being slightly less democratic as particular views of the elite are taken into account, as opposed to the whole "general masses". Finally Marxists view power in a third-dimension and this includes the ability to shape and manipulate desires, a matter of "false-consciousness". Marxists are completely opposed to the State, as they believe the State only operates for the benefit of the Bourgeoisie. ...read more.