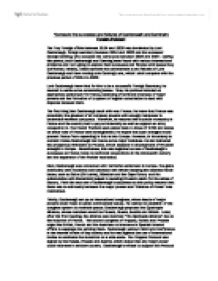 &quot;Compare the successes and failures of Castlereagh and Canning's Foreign Policies&quot;

"Compare the successes and failures of Castlereagh and Canning's Foreign Policies" The Tory Foreign affairs between 1814 and 1830 was dominated by Lord Castlereagh, foreign secretary between 1814 and 1822 and his successor George Canning, who occupied the same post between 1822 and 1827. During this period, both Castlereagh and Canning were faced with various international problems and I am going to explore their successes and failures with issues they confronted. Initially, I shall examine the achievements and failures of Lord Castlereagh and then moving onto Canning's era, which I shall compare with the previous period of 1814 to 1822. Lord Castlereagh knew that for him to be a successful Foreign Secretary, he needed to settle some outstanding issues. Thus, his policies included an appropriate settlement for France, balancing of territorial interests of major powers and the formation of a system of regular consultation to deal with disputes between them. The first thing that Castlereagh dealt with was France. He knew that France was potentially the greatest of all European powers with enough manpower to undertake renewed conquests. Therefore, he restored the Bourbon monarchy in France and the country had to pay an indemnity as well as support an army occupation in. ...read more.

Castlereagh's refusal to support this Protocol distanced him from Metternich and seemed to presage the collapse of diplomacy. The last two congresses, the Congress of Laibach and Verona were not attended by any British representatives, after which it was never held again. I think Castlereagh's suicide just before the Congress of Verona ended any chance of the congress's revival. Could he have brought back the congress from the brink of interventionism is a more open question than the historians are prepared to acknowledge. Although branded as a failure, the Congress system cannot be described as one because I feel that it set the pace for future organisations, like the European Union, United Nations or even the League of Nations, which have met with successes. However, overall Lord Castlereagh should be given credit for his intelligent and restrained policies. He created a new international system in 1815 and maintained it without distorting British interests. He also maintained co-operation and his personal tragedy had greater impact on foreign policy than it did on home affairs. I am now going to compare his policies with his successor George Canning's. George Canning was a refreshing change to the British parliament as he was seen as a progressive and positive individual. ...read more.

Finally, Canning had to deal with the Greek revolt under Turkish rule in Eastern Europe. The Greeks wanted independence from the Islamic Ottoman Empire and as Greeks were fellow Orthodox Christians, Russians sided with them. Canning was concerned with Russian expansion in the East, which would threaten British India. This is why Canning decides to remain neutral and the Greek independence occurs. However, in 1825, the Greeks asked the British and Russians to mediate with either Greece or Turkey. Canning pledged with France and Russia that if Turkey did not ceasefire, they would interfere. Although, Canning died two months before battle, the Turks were destroyed in the Battle of Navarino in 1827. This is a notable success of Canning as he used his influence to allow Greek independence but not at the expense of Russian expansion. Castlereagh and Canning both had their fair share of successes and failures. Nevertheless, I feel that Castlereagh's trial to establish of a system to maintain peace and equilibrium is probably a greater achievement than any other. Understandably, Canning was less committed to an international system, in which he had no hand in creating. I believe that Castlereagh's achievements were for the future peace of mankind whereas Canning's achievements were essentially contemporary only. ...read more.