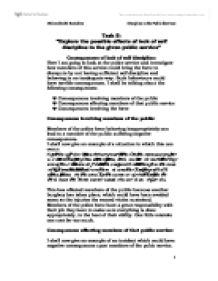 Consequences of lack of self discipline:Here I am going to look at the police service and investigate how members of this service could bring the force to disrepute by not having sufficient self

Self discipline: It is important that a good level of self discipline is maintained. This involves behaving in the most appropriate way. Self discipline is formed by a number of qualities which are personal presentation, punctuality, time management, reliability, attendance, composure attitude, performance and personality. I shall now give an outline of what is meant by each of these: Personal presentation: people make assumptions about us judging us by the way we look. This is simply because they will notice out appearance within seconds of seeing us much, much before they get to learn about us. In many cases people you will encounter will never get to know much about you at all. This is why it is important to present yourself in an adequate way. This becomes even more important when you are working within the public services, where it is important to have the respect of society. Punctuality: it is vital to be punctual for a variety of reasons. You are to get places in time because in many occasions people will not wait for you to arrive. If you are late to catch the train you will suffer the consequences because you will not be waited for. ...read more.

This is the reason why it is important to do your best not just settle for what is enough. Personality: our personality is what makes us different to others. In the public services even though you would be wearing the same uniform as your fellow colleagues your personality is what will make you different and be seen as an individual in the eyes of society, because of this your personality needs to be as adequate as possible. Current affairs: Bahrain police 'beat' protesters About 50 people in Bahrain where beaten and arrested by police in the capital, Manama, a human rights activist and other witnesses say. Nabil Rajab said police acted to disperse demonstrators who protested outside the king's royal court against the lack of jobs in the Gulf kingdom, He said among those beaten was Abdulhadi al-Khawaja, the head of the banned Bahrain Centre for Human Rights. The interior ministry said police acted after being attacked by the protesters. Its statement said a number of police officers were hurt by the demonstrators who refused a police order to leave the area. Those arrested where later released. The above article was found in the following website. http://news.bbc.co.uk/2/hi/middle_east/4108990.stm ?? ?? ?? ?? Miriam Smith-Renieblas Discipline in the Public Services 1 ...read more.