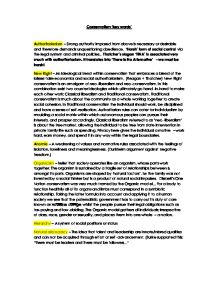 Conservatism 'key words' Authoritarianism - Strong authority imposed from above is necessary or desirable and therefore demands unquestioning obedience. 'Harsh' form of social control via the legal system and criminal policies.. Thatcher's slogan 'TINA' is associated very much with authoritarianism. It translates into 'There Is No Alternative' - we must be harsh! New Right - An ideological trend within conservatism that embraces a blend of the laissez-faire economics and social authoritarianism. (Reagan + Thatcher) New Right conservatism is an amalgam of neo-liberalism and neo-conservatism. In this combination exist two counter ideologies which ultimately go hand-in-hand to make each other work; Classical liberalism and Traditional conservatism. Traditional conservatism is much about the community as a whole working together to create social cohesion. In Traditional conservatism the individual should work, be disciplined and have a sense of self-realisation. Authoritarian rules can cater for individualism by moulding a social matrix within which autonomous peoples can pursue their interests, and prosper accordingly. ...read more.

Taking the latter formula into account and applying it to a human society we see that the paternalistic government has to carry out its duty of care known as noblesse oblige whilst the people pursue their legal obligations such as tax-paying and law-abiding. The Organic model gathers all individuals; irrespective of class, race, gender or sexuality, and places them into one whole - a nation. Hierarchy - A system of social positions or status Natural aristocracy - The idea that talent and leadership are innate/inbred qualities and can not be acquired through effort or self-advancement. (Burke supported this; "there must be leaders and there must be followers..." Authority - The power or right to exert influence (give orders, make decisions, enforce obedience). Conservatives authority develops naturally in society --> Parents have authority over their children. Thus --> Authority refers to the ability to exert influence over a people either by force or by legitimate procedures. ...read more.

Populism - the political doctrine that supports the rights and powers of the common people in their struggle with the privileged elite. (Per�n --> helping the 'shirtless ones') Paternalism - the attitude (of a person or a government) that subordinates should be controlled in a fatherly way for their own good. (Laws such as wearing a seatbelt. 'Soft' and 'Hard' paternalism) Neoliberalism - Liberal political views with an emphasis on economic growth. Free market as the ideal form of social organisation and as a means of solving all central political issues. (Friedman) Neoconservatism - A modern version of social conservatism that emphasises the need to restore order, and return to traditional values. One must observe the context within which Thatcherism developed. Thatcher came into office at a time when society had become permissive. Gay rights were being sought after, multiculturalism was on its highs, teenage pregnancies became modern fads, rebellion became the Rock'n'Roll attitude of the time --> society was loose. Thatcher thus decided that order must be restored. And she brought this restoration about by punitive laws and restrictions. ...read more.