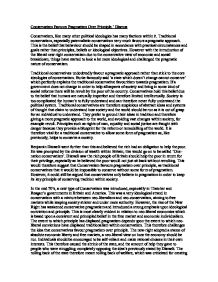 Conservatism Favours Pragmatism Over Principle.' Discuss Conservatism, like many other political ideologies has many factions within it. Traditional conservatism, especially paternalistic conservatism very much favours a pragmatic approach. This is the belief that behaviour should be shaped in accordance with practical circumstances and goals rather than principles, beliefs or ideological objectives. However with the introduction of the liberal new right conservatism due to the conservative view of economic and social breakdown, things have started to look a lot more ideological and challenged the pragmatic nature of conservatism. Traditional conservatives undoubtedly favour a pragmatic approach rather than stick to the core ideologies of conservatism. Burke famously said 'a state which doesn't change cannot conserve' which perfectly explains the traditional conservative favouritism towards pragmatism. If a government does not change in order to help all aspects of society and bring in some kind of social reforms there will be revolt by the poor of the country. Conservatives hold this belief due to the belief that humans are naturally imperfect and therefore limited intellectually. Society is too complicated for human's to fully understand and can therefore never fully understand the political system. ...read more.

However, it could still be argued that conservatives only believe in pragmatism in order to keep its key principle of conserving tradition within society. In the mid 70's, a new type of Conservatism was introduced, especially in Thatcher and Reagan's governments in Britain and America. This was a very ideological strand in conservatism with a mixture between neo-liberalism and neo-conservatism, aiming to free markets while keeping society stricter and under more authority. However, the rise of the New Right has weakened conservative pragmatism and introduced a strong emphasis upon ideological conviction and principle. This is most clearly evident in relation to neo-liberal economics which is based upon a consistent and principled belief in the free market and economic individualism. The extent to which principle has displaced pragmatism depends upon the extent to which neo-liberal convictions have displaced traditionalism within conservatism. This therefore challenges the idea that conservatives favour pragmatism over principle. The new-right adopted a stance of absolute economic liberty and free markets, a neo-liberal view on how the economy should be run. ...read more.

The new right therefore believed in social authoritarianism and a strong state to reassert the moral foundations of politics and of society. This would seem to be therefore a very ideological way in which to deal with the both economic and social prosperity which the new right was trying to gain, and therefore a step away from the traditional conservatives view on a pragmatic approach in order to stop breakdown. We can therefore see were conservatism differs hugely and therefore it is hard to say which side is more important and thus favours conservatism as a whole. However, traditional conservatism is likely to use pragmatism within society to stop its breakdown and keep tradition within society. This key theme of the conservative ideology and therefore could be argued that pragmatism is only used to keep the key principles of conservatism. Likewise, the new right was very ideological in order to deal with the social and economic problems of that particular time and therefore it may have been a pragmatic approach to do so. Therefore conservatism favours principle over pragmatism as it seems to only use pragmatism as a way to preserve its key principles. ...read more.