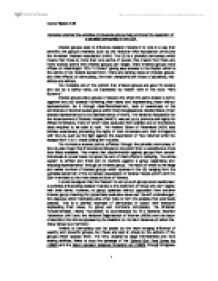 Consider whether the activities of pressure groups help or hinder the operation of a pluralist democracy in the USA.

Consider whether the activities of pressure groups help or hinder the operation of a pluralist democracy in the USA. Interest groups seek to influence decision makers in to vote in a way that benefit's the group's interests such as the National Rifle Association (NRA) and the American Medical Association (AMA). The US is a pluralist democracy which means that there is more than one centre of power, this means that there are many access points that interest groups can target. Many interest groups have offices on Washington DC's "K Street" giving easy access to the Capitol which is the centre of US Federal Government. There are varying views on interest groups and their effects on democracy, the main viewpoints are those of pluralists, neo-elitists and elitists. The Pluralists are of the opinion that interest groups are good for society and act as a safety valve, as expressed by Robert Dahl in his book "Who Governs". Interest groups allow groups of people who share the same ideals to come together and act towards furthering their views and representing those without representation, be it through disenfranchisement, lack of awareness or the dominance of another social group within their Congressional District/State (Their elected representative is not representative of them). The National Association for the Advancement of Colored People (NAACP) ...read more.

Board of Education (1957) and supported the Civil Rights Movement throughout the 1950's and 1960's, eventually leading to the Civil Rights Act (1964) and the Voting Rights Act (1965). Common Cause is dedicated to "...ensuring that government and political processes serve the general interest, rather than special interests..." and has supported greater transparency in campaign finance, backing the Federal Election Campaign Act (1971) and the McCain/Feingold Bipartisan Campaign Reform Act (2002). 2000 and 2004 Presidential Candidate, Ralph Nader, is an active automobile safety campaigner, having taken on General Motor's over the unsafeness of their Corvair model. Further campaigning also led to the National Traffic and Motor Vehicle Safety Act (1966) and the creation of the National Highway Traffic Safety Administration. Despite the evidence above of the good those interest groups do, Elitists, believe differently, as demonstrated by C. Wright Mills in "The Power Elite"; "a small elite with interconnected interests govern America and powerful and wealthy interest groups dominate decision making." Meanwhile, Neo-Elitists view Pluralists as na�ve, stating that interest groups use their influence to shape public opinion by arguing that their interests coincide with basic American values (Individualism). For them, the political system isn't open to all, only those who have the resources and influence can set up a group that is truly effective, therefore excluding the poor and vulnerable at the expense of the powerful and wealthy groups who are an unrepresentative minority. ...read more.

Interest groups can also be seen as selfish, sectional interests often with no regard for others or, indeed, the common good. This certainly applies to economic interests, large businesses or corporations who can afford everything needed to successfully extend their views to the decision makers, leading to distortion of policy and the frustration of important measures. Oil and Gas industries attacked and killed off Carter's Energy Bill, influencing the Congressional committees to vote against it. More recently, large scale polluters have ensured that the US hasn't met their Kyoto Treaty obligations. Interest groups supporting those without representation have certainly had their successes, NAACP and Civil Rights, which have helped the operation of the US's pluralist democracy; but their progress was painstakingly slow. The NAACP spent over 60 years fighting for civil rights for African Americans and even when the first legislation passed it wasn't sufficient and was ignored by many who mattered. Wealthy and powerful groups enjoy more effective and rapid success in gaining their aims; they have access to the decision makers and have the money to influence them. Unfortunately, money often has a greater bearing on people's decisions rather than their conscience, which sets back greatly those without the means of doing similar. The fight between interest groups is staged upon an uneven playing field with those who represent the minority influencing the decisions that govern the majority, most definitely a hindrance to the operation of a democracy. ?? ?? ?? ?? Conor Slater 2.36 1 ...read more.