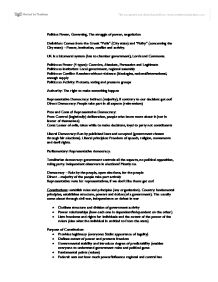 Politics: Power, Governing, The struggle of power, negotiation Definition: Comes from the Greek "Polis" (City state) and "Polity" (concerning the City state) - Power, institution, conflict and activity. UK is a bicameral system (has to chamber government), Lords and Commons. Politics as Power (4 types): Coercive, Absolute, Persuasive and Legitimate Politics as Institution: Local government, regional assembly Politics as Conflict: Resolves without violence (Ideologies, national/international, enough supply Politics as Activity: Protests, voting and pressure groups Authority: The right to make something happen Representative Democracy: Indirect (majority), if contrary to our decision: get out! Direct Democracy: People take part in all aspects (referendum) Pros and Cons of Representative Democracy: Pros: Control (logistically) deliberation, people who know more about it (not in favour of themselves) Cons: Lesser of evils, takes while to make decisions, loyal to party not constituents Liberal Democracy: Run by publicised laws and accepted (government chosen through fair elections). Liberal principles: Freedom of speech, religion, movements and devil rights. Parliamentary: Representative democracy. Totalitarian democracy: government controls all the aspects, no political opposition, ruling party. Independent observers in elections? Mostly no. Democracy - Rule by the people, open elections, for the people Direct - majority of the people take part actively Representative: vote for representatives, if we don't like them: get out! Constitutions: establish rules and principles (any organisation). Country: fundamental principles, establishes structure, powers and duties (of a government). The usually come about through civil war, independence or defeat in war * Outlines structure and division of government activity * Power relationships (how each one is dependent/independent on the other) * Lists freedoms and rights for individuals and the extent of the power of the rulers (also what the individual in entitled to from the state) Purpose of Constitution: * Provides legitimacy (everyone: Stalin: appearance of legality) * Defines extent of power and protects freedom * Governmental stability and introduce degree of predictability (enables everyone to understand government rules and political game * Fundamental points (values) ...read more.

* It is seen as relevant and up to date as it 'adapts and responds' to changing political and social circumstances. * E.g. Devolution a response to increased nationalism. * Supreme constitutional power is vested, ultimately, in the elected House of Commons. Changes therefore usually arise through democratic pressure. Effective Government * Given the absence of a 'written constitution', government decisions that are backed by Parliament cannot be overturned by the judiciary. * The concentration of power in the hands of the executive within the parliamentary system allows UK governments to take strong & decisive action. * E.G. Atlee Govt 1945 - 1951 established the NHS, introduced comprehensive national insurance, nationalised key industries: railways, coal, steel, electricity * Thatcher Govt 1979 - 1990: introduced privatisation, reformed welfare state. * History and Tradition: * Argument associated with conservative thinkers. * Constitution based on customs and traditions links past and present generations. * Given the role of common law and conventions, the UK constitution has developed and grown over time, giving it an 'organic' character. * It has historical authority as it has been tried and tested and therefore 'shown to work'. Criticisms of Constitutions: * It is sometimes difficult to know what the constitution says. * Confusion arises over unwritten elements such as ministerial responsibility and hung parliament Elective Dictatorship: Once elected UK governments can more or less do as they please (that is, act as dictators) until they come up for re-election (sovereignty is in parliament which the government of the day controls) Over centralised system of government with weak/ineffective checks and balances because; * Prime Minister dominates the cabinet * The House of Commons is more powerful than the House of Lords (Elective Dictatorship - weak arse checks and balances) * The Executive usually controls Parliament/Commons * Central government controls local government Weak protection of Rights: * The UK constitution provides weak protection for individual rights and civil liberties. ...read more.