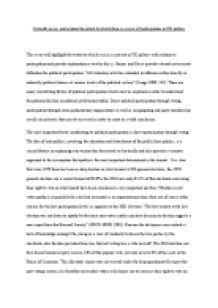 ﻿Critically assess and explain the extent to which there is a crisis of participation in UK politics This essay will highlight the extent to which a crisis is present in UK politics with relation to participation and provide explanation as to why this is. Barnes and Kasse provide a broad yet accurate definition for political participation; ?All voluntary activities intended to influence either directly or indirectly political choices at various levels of the political system? (Conge 1988: 242). There are many constituting factors of political participation which must be explored in order to understand the potential decline in political involvement today. Direct political participation through voting, participation through extra parliamentary organisations as well as campaigning and party membership are all crucial areas that must be assessed in order to come to a valid conclusion. The most important factor contributing to political participation is direct participation through voting. The idea of anti-politics, involving the alienation and detachment of the public from politics, is a crucial feature in explaining why turnout has decreased so drastically and also provides a counter argument to the assumption that apathy is the most important determinant in the turnout. It is clear that since 1950 there has been a sharp decline in voter turnout at UK general elections; the 1950 general election saw a record turnout of 83.9%, the 2010 saw only 65.1% of the electorate exercising their right to vote in what should have been considered a very important election. ...read more.

This in turn, leads to an increase in political participation. Similarly the infamous Fathers4Justice campaign and the rise of the ?Super Dads? illustrates how a salient issue leads to increased political participation. The ?glamorisation? of interest politics with examples such as these is a very important tool in keeping participation alive when it comes to pressure and interest groups. It is apparent that there has not been a decline in involvement through pressure groups, involvement in these sorts of groups are not only a way for the politically engaged to actively participate between elections, but for those apathetic or abstaining members of the electorate to participate. Both 2010 and 2011 saw action amongst the young in protest to the increase in tuition fees. The 2010 riots were over shadowed by many arrests and aggression between both the police and the protesters. However, the November 2011 protest provided little trouble as thousands of protesters march their way through London. Although we may not classify the protests as a pressure group, it definitely is an illustration of pressure action politics. Furthermore, this dispels the assumption that there is an apathetic pandemic amongst the young. Salient issues that will directly affect the young will be met with participation as illustrated in both December and November. Participation in campaigns represents an extension of electoral participation beyond the act of voting (Dalton 2003). ...read more.

With reforms we can expect to see higher levels of turnout and even increases in campaigning and party membership. There is no doubt there is a crisis apparent with voting levels at an all time low, however interest in politics is still high meaning there are many of the electorate who would be willing to engage in political participation if such reforms occur. Therefore we are able to establish that the extent of the crisis is not as great as feared, it is simply in the hands of Parliament to legislate reforms hereby mobilizing the electorate in order to boost turnout on election day. Conge, Patrick J (1988) The Concept of Political Participation: Toward a Definition, Comparative Politics . New York: Ph.D. Program in Political Science of the City University of New York Dalton, Russell J (2006): Citizen Politics , Washington: Congressional Quarterly Press Dunleavy, Patrick, Chris Gilson and David Sanders ?Is the UK Electorate Disengaged?? British Politics and Policy at LSE (http://blogs.lse.ac.uk/politicsandpolicy/2010/03/12/is-the-uk-electorate-disengaged/ 24/11/11) Hansard Society: Audit of Political Engagement 5 (www.hansardsociety.org.uk/files/folders/1142/download.aspx Heffernan, Richard, Phillip Cowdrey, Colin Hay, eds.(2011). Developments in British Politics 9. Basingstoke: Palgrave Macmillan IPSOS MORI: None of the Above, Non Voters and the 2001 Election. Research Archive (http://www.ipsos-mori.com/researchpublications/researcharchive/1280/None-Of-The-Above-NonVoters-And-The-2001-Election.aspx) Marshall, John (2009): ?Membership of UK Political Parties? Library House of Commons (www.parliament.uk/commons/lib/research/briefings/snsg-05125.pdf) Question Time (22/10/2009) British Broadcasting Corporation Qvortup, Matt (2007) The Politics of Participation, Manchester: University of Manchester Press Word Count 2,308 ...read more.