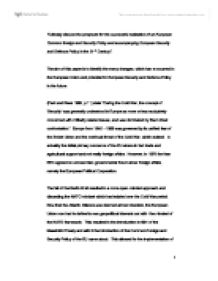 &quot;Critically discuss the prospects for the successful realisation of an European Common foreign and Security Policy and accompanying European Security and Defence Policy in the 21st Century&quot;.

"Critically discuss the prospects for the successful realisation of an European Common foreign and Security Policy and accompanying European Security and Defence Policy in the 21st Century". The aim of this paper is to identify the many changes, which have occurred in the European Union and potential for European Security and Defence Policy in the future. (Park and Rees 1998, p.11) state "During the Cold War, the concept of 'Security' was generally understood in Europe as more or less exclusively concerned with militarily related issues, and was dominated by East-West confrontation." Europe from 1945 - 1989 was governed by its unified fear of the Soviet Union and the continual threat of the Cold War, which existed. In actuality the initial primary concerns of the EU where in fact trade and agricultural support and not really foreign affairs. However, in 1970 the then EEC agreed on a loose inter-governmental forum about foreign affairs, namely the European Political Corporation. The fall of the Berlin Wall resulted in a more open-minded approach and discarding the NATO mindset which had existed over the Cold War period. Now that the Atlantic Alliance was deemed almost obsolete, the European Union now had to define its own geopolitical interests out with the mindset of the NATO framework. This resulted in the introduction in1991 of the Maastricht Treaty and with it the introduction of the Common Foreign and Security Policy of the EU came about. ...read more.

(Park and Rees 1998, p.13) state "shifts in the global balance of power are likely to pose more traditional, military, security problems to Europe." The breakdown of the Soviet Block and then again enlargement introduce these types of problems. The Western European Union (WEU) was established on 6 May 1955 based in London Headquarters. Membership of the WEU consisted of the Six alongside the United Kingdom and offered an opportunity for seven European countries to discuss issues of Security in Europe. The WEU in fact assisted with the rearmament of West Germany under admission of West Germany to the North Atlantic Treaty Organisation (NATO). The WEU Ministers meets twice yearly and more regularly at an ambassadorial level about twice per month to debate and report on security issues in Europe. The WEU according to (Bainbridge and Teasdale 1996, p.478) "has no military capability, being wholly dependant on forces assigned to it by Member States. However unlike NATO, it can act 'out of area', as it did by undertaking minesweeping in the Gulf during the Iran-Iraq war." The WEU marked a unified security policy in the EU. Around 1987 the WEU acted as a forum for discussing specific European Security Questions and assisted by the Hague according to (Bainbridge and Teasdale 1996, p.478) "the adoption of the 'Platform on European Security Interests', which contained the commitment to develop a 'more cohesive European defence identity'." ...read more.

Indeed the unilateral approach, which has been taken by America since the reign of George Bush Junior, has in fact been causing much upset in Europe. In particular the current Iraq conflict has come into much mixed opinion between the European Member States. The United Kingdom has been behind Bush in the War against Iraq/Saddam; on the other side of the scope is France who was completely against any action. Common Foreign Security Policy in Europe as it currently stands has taken a bashing and the damage may not be undone. Change is needed to ensure that a unified Europe stands unified in matters such as Iraq. The European Union has always operated on an incremental process and learnt from previous mistakes. The future of the EU and its European Security and Defence Policy in the 21st Century will have to be completely rethought after the effects from issues arising from Iraq and other military conflicts, which have highlighted a flawed system. The autonomy of Europe is not a reality at present as the Rapid Reaction Force is not strong enough yet to defend all of Europe. A unified approach from both NATO and Europe in relation to Common Foreign Security Policy is required and holds the key to European Success. As far as America is concerned however, the autonomy of the EU is a very big threat and is perhaps not the best option to suit them. Is Europe strong enough in the future to stand against America? Only time will tell. ...read more.