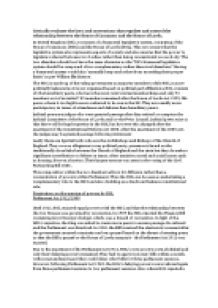 Critically evaluate the laws and conventions that regulate and control the relationship between the House of Commons and the House of Lords.

﻿Critically evaluate the laws and conventions that regulate and control the relationship between the House of Commons and the House of Lords. In United Kingdom (UK), it consists of a bicameral legislative system, consisting of the House of Commons (HOC) and the House of Lords (HOL). This is to ensure that the legislative system also represents aspects of society and also ensures that the power to legislate is shared between two bodies, rather than being concentrated on one body. The two chambers should not have the same character as the ?UK?s bicameral legislative system should be composed of two complementary rather than rival chambers.? Having a bicameral system would also ?mutually keep each other from exceeding their proper limits? as per William Blackstone. The HOC is made up of the ruling government as majority members while HOL is more politically balanced as it is not organised based on political part affiliations. HOL consists of; the hereditary peers, who have the most controversial memberships and only 92 members out of an initial 759 members remained after the House of Lords Act 1999; life peers, where it is a high honour conferred to be one in the UK. They are usually more participatory in terms of attendance and debates than hereditary peers. ...read more.

Hence referring back to the electorate, particularly contentious Bills, usually involved a revision of the constitutional settlement, which had been passed by the Commons. Hence, the doctrine as understood today is that HOL should not reject bills at the second or third reading. This convention can be seen as self-imposed by HOL and established the primacy of HOC and this served as a self-legitimising attempt. This was supported by Lord Strathclyde who believed ?that the unelected House must not challenge the clear mandate of the elected one. HOL delaying Bills reflected on the government bills and raised concerns that a manifesto bill should not be subjected to ?wrecking amendments? which would change the government?s manifesto intention as proposed in the Bill and the manifesto is not to be revised or rejected at this stage. The relationship between the HOC and HOL evolved when considering the War Damages Bill 1965, where if the matter raised issues important to justify such drastic action (intervention with a manifesto Bill) and if the issue is such that the electorate can understand it and express approval for the House of Lord?s position (tries to reconcile its role with public legitimacy of its actions). HOL?s significant contribution despite restrictions Despite the many restrictions HOL may have, they still play a crucial role in parliament. ...read more.

If HOL were to be partially elected; coalition government?s proposals would allow the retention of other non-electable categories and allow the Salisbury convention to continue to operate against the unelected peers. A hybrid chamber could comprise some peers (elected) with legitimacy and others with not. Some peers would be seen to be more legitimate than others. * Nevertheless, not being fully elected allows the composition of the House of Lords to be determined to be more representative of the society. There is more pressure on them to be legitimate in the eyes of the electorate since they need to justify their presence. If the HOL became fully appointed, this would not be good as the HOL would be rival chambers to HOC, thus losing the essence of a bicameral legislative system. * In conclusion, the bicameral system in UK can be seen to be largely successful one as compared to having one chamber that can act as a check and balance on each other. They can also facilitate a deliberative approach to legislation for one chamber is free of the ruling government, to enhance oversight of the executive branch and can also be seen as a monitor to ensure it abides its election manifesto. This would help hinder the passage of flawed or reckless legislation. However the only hindrances of having an bicameral legislative systems slows down the passing of legislation and is expensive to maintain two legislative houses. ...read more.