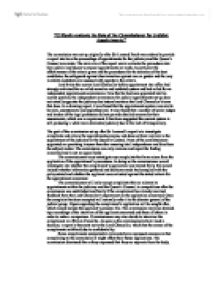 "Critically evaluate the Role of the Commissioner for Judicial Appointments." The commission was set up originally after Sir Leonard Peach was ordered to provide a report into how the proceedings of appointments for the judiciary and the Queen's Counsel was made. The main aim of the report was to evaluate the procedures into how judicial and Queen's counsel appointments are made. In particular the effectiveness of the criteria given and the procedures for the selection of the best candidates, the safeguards against discrimination against race or gender and the way in which candidates are assessed with regards to the criteria. Lord Irvine the current Lord Chancellor before appointment into office had strongly criticised the so-called secretive and outdated system and had called for an independent appointments commission. Now that he has been appointed into his current position, the independent commission for judicial appointments set up does not actually appoints the judiciary but instead monitors the Lord Chancellor's team that does. In a damning report, it was found that the appointments system was said to be slow, unsystematic and unprofessional. ...read more.

Once the complaint has been accepted will normally refer it to the director general of the judicial group. Papers regarding the complainant's application will be sought after, which would include the applicant's personal file. The commission may also demand tape recordings of the interview of the applicant concerned and those of others in order to make a comparison. Commissioners may also decide to interview the complainant or officials if need be. As soon as the commissioners have made a decision, a report is then sent out to the Lord Chancellor, which has the names of the complainants with held due to confidentiality. Some complainants and potential claimants have expressed concerns in that complaining to the commission it might affect their future applications. The commission dismissed this as they expressed that they are separate from the body, which advises on appointments and are only concerned with the scrutiny of the procedure and complaints of the judicial appointments. During the period between the 15th March and 31st March 2002, ten complaints were accepted for investigation. Of the ten complaints, issues that expressed concern included that of gender bias, ethnic bias, age bias and the fairness of the consultation system. ...read more.

Upon examination of the 2001 silks competition, the commission had found that it was hard to conclude on how decisions were made in the appointment of a Silk due to the lack of an audit trial. It has been emphasised by the commission that the failure of a clear audit trial will seriously undermine the confidence of the judicial appointments system. The commission also suggests that the process of application should not be subject to delays as the process itself without delays are lengthy as it is. It has also been expressed that potential applicants may be put of from applying to judicial office due to the adverse effect of a long period of uncertainty on their ability to plan their careers. The commission is a relatively new body in which its main role is to reduce the flaws in the system is which appointments for judicial office and Silks are made. Emphasis is put on the fact that the standard of selection is high, but the main issue is to look upon ways in which others that are of high standard but are not selected due to flaws. ...read more.