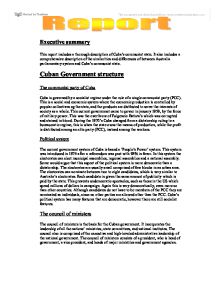 Executive summary This report includes a thorough description of Cuba's communist state. It also includes a comprehensive description of the similarities and differences of between Australia parliamentary system and Cuba's communist state. Cuban Government structure The communist party of Cuba Cuba is governed by a socialist regime under the rule of a single communist party (PCC). This is a social and economic system where the economic production is controlled by popular collectives eg the state, and the products are distibuted to serve the interests of society as a whole. This current governmnet came to power in january 1959, by the force of mitilary power. This was the overthrow of Fulgencio Batista's which was corrupted and stained in blood. During the 1970's Cuba changed from a dictatorship ruling to a bureaucratic regime, this is when the state owns the means of production, while the profit is distributed among an elite party (PCC), instead among the workers. Political system The current government system of Cuba is based a 'People's Power' system. This system was introduced in 1976 after a referendum was past with 98% in favor. In this system the electorates can elect municipal assemblies, regional assemblies and a national assembly. Some would argue that this aspect of the political system is more democratic than a dictatorship. The electorates are usually small comprised of few blocks in an urban area. The electorates can nominate between two to eight candidates, which is very similar to Australia's electorates. ...read more.

Human rights Cuba has developed a highly effective machinery of repression. The lack of basic civil rights is supported by the Cuban law. Criminals and political enemies to the PCC are threatened by armed security forces. this silences any directed opposition on the PCC with heavy prison terms, threats of prosecution, harassment, or exile. Cuba uses these tools to restrict severely the exercise of fundamental human rights of expression, association, and assembly. The conditions in Cuba's prisons are inhuman, and political prisoners suffer from poor treatment and torture. In recent years, many new laws have been introduced to further repress opposition. Although there are many international appeals for change, with occasional releases of political prisoners, prosecuting continues. Government priorities Health and education are major priorities for the Cuban revolution. It provides free health care including advanced surgical procedures, which are unavailable in other third world countries. After the revolution there were only 3000 doctors, today there are more than 64000, the highest number per head in the world. This has greatly affected Cuba's which has raised the life expectancy from 55 to 74 years. Education is also a priority to Cuba, which also has the highest number of teacher per head in the world. Before the revolution literacy was around 30%, today this has almost been eliminated with the large majority being literate. Comparison of Australia with Cuba There are a many differences between the Australian democratic, federal state system and the Cuban communist state. ...read more.

Cuba has not let the Red Cross inspect prisons since 1989. There have been many reports of poor treatment to prisoners. The is evidence of this treatment in the case of Juan Carlos Gonzalez. He is a blind political active journalist who was fighting for human rights in Cuba. However he has been sentenced to prison. Carlos bravely continues his efforts for human rights as he writes "If I die, I will die content knowing that I was defending the cause of God." "I do not fear death." This issue is controlled by the media, however prisoners and ex-prisoners have witnessed first hand the terrible treatment in prison and have let their stories be known to the world. Government within society Australia's current government the Liberal party believes in reducing government interference in society. For example not having direct interference with issues such as the recent Cronulla race riots, where the state government took immediate action against the violence. On the other hand, the Cuban communist party enforces in totalitarianism. Cuba's government maintains a highly effective security offense comprising of many military layers which track and imprison any political opposition to the communist party. Australia's government being a democracy controls and enforces in the best interests of Australians, while Cuba's communist party uses supreme power to serve its own interests. Conclusion There are many differences and some similarities between Australia's democratic parliamentary system and Cuba's communist state. An overview of these clearly shows that Australians are very fortunate to live in a country with freedom of speech, human rights and an efficient and fair parliamentary system, which serves the interests of Australians. ...read more.