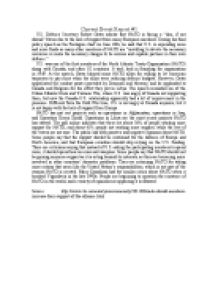 ﻿Current Event Report #1 U.S. Defence Secretary Robert Gates admits that NATO is facing a ?dim, if not dismal? future due to the lack of support from many European members. During his final policy speech as the Pentagon chief on June 10th, he said that U.S. is expending more and more funds as many other members of NATO are ?unwilling to devote the necessary resources or make the necessary changes to be serious and capable partners in their own defence.? U.S. was one of the first members of the North Atlantic Treaty Organization (NATO) along with Canada, and other 10 countries. ...read more.

The speech reminded me of the Cuban Missile Crisis and Vietnam War, where U.S. was angry of Canada not supporting them, but now the Canada-U.S. relationship apparently had a lot of improvement in the presence. Different from the Cold War time, U.S. is not angry at Canada anymore, but it is not happy with the lack of support from Europe. NATO has put out projects such as operations in Afghanistan, operations in Iraq, and Operation Ocean Shield. Operations in Libya are the most recent projects NATO has started. ...read more.

funding. There are criticisms saying that instead of U.S. asking the participating members to spend more, it should spend less on arms and weapons. Some people say that NATO should not be gaining anymore support as it is acting beyond its interests, as they are becoming more involved in other countries? domestic problems. They are criticizing NATO for taking more actions that seem like the United Nation?s responsibilities, which is not part of the reasons NATO is created. Many Canadians had the similar critics about NATO when it bombed Yugoslavia in the late 1990s. People are beginning to question the existence of NATO in the world, and a variety of opinions are appearing it is debated. Source: http://www.cbc.ca/news/yourcommunity/2011/06/nato-should-members-increase-their-support-of-the-alliance.html ...read more.