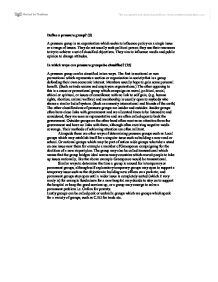 Define a pressure group and how they can be classified.

(Such as amnesty international and friends of the earth) The other classifications of pressure groups are insider and outsider. Insider groups often have close links with government and are allocated times to be listened to and considered, they are seen as representative and are often called upon to back the government. Outsider groups on the other hand often receive no attention from the government and have no links with them, although often receiving negative media coverage. Their methods of achieving attention are often militant. Alongside these are other ways of determining pressure groups such as Local groups which may establish itself for a singular issue such as building a new road or school. ...read more.

Similar ways to determine the time a group is around for is temporary or permanent groups, although self explanatory temporary groups may open to support a temporary issue such as the objection to building new offices on a park etc, and permanent groups stay open until a wider issue is completely sorted (which it very rarely is) for example fundraisers for a new hospital may decide to stay on to support the hospital or keep the good services up, or a group may emerge to solve a permanent problem i.e. Oxfam for poverty. Lastly groups can be called peak or umbrella groups which are groups which speak for a variety of groups, such as C.B.I for trade etc. ...read more.