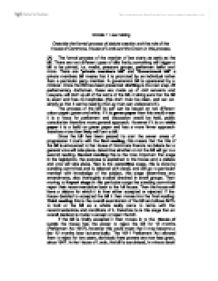 Describe the formal process of statute creation and the role of the House of Commons, House of Lords and the Crown in this process.

Module 1: Law making Describe the formal process of statute creation and the role of the House of Commons, House of Lords and the Crown in this process. (A) The formal process of the creation of law starts as early as the bill. There are two different types of bills firstly; something will trigger a bill to be printed, i.e. media, pressure groups, parliament ballot and more. There are "private members bill" and "Government bill" a private members bill means that it is promoted by an individual rather than a particular party member. A government bill is sponsored by a minister. Once the Bill has been presented drafting is the next step, 26 parliamentary draftsmen, these are made up of civil servants and Lawyers, will draft up all of the terms of the bill, making sure that the bill is exact and has no loopholes (this draft must be clear, and set out simply so that it can be read by the Lay man can understand it). The process of the bill its self can be issued on two different colour paper; green and white. ...read more.

If the bill is finally accepted it then moves in to the House of Lords the house has the power to reject the bill for 12 months (Parliament Act 1947), however this could mean that it may become a law 12 months later automatically. The 1911 Parliament Act allowed them to reject for two years, obviously there powers are now less great, since 1947. In the House of Lords, the bill is scrutinised, in minute detail it is checked entirely, revise legislation and make important debates. Within the House of Lords they carry out their own; first reading, second reading, committee stage, report stage and third reading. Finally when passed by the House of Lords the bill is at its final destination, The Monarch it is then the Queens duty to sign the bill, all bills require the royal asset to become law, however the monarch also has other roles with in the legislative process. This includes the opening and the closing of parliament, and the appointment of the peers to the House of Lords. ...read more.

This is a restriction by a year since the Parliament Act of 1911 allowed them to delay Law for 2 years. Also the number of MPs whom are selected from the ballot box, of 'Back Benchers' are only selected in small number this means that only a few recommendation from 'back benchers' are heard, also the success rate is somewhat not very high. Also there is a time limit on legislation processes, and if there was an emergency legislation, known as 'panic legislation' this creates law uncompleted laws, and may contain loopholes, fro example Dangerous Dogs Act 1991, this law was rushed within the drafting of it. Also such time limit can also leave unfinished laws, as parliament closes for campaigning around election time etc...Panic legislation can be caused by pressure on the Government by the lobbying etc, which causes bills to be poorly drafted. Another disadvantage is that parliamentary elections only take place once every 5 years, this may have lead to deterioration with in the party, and another party could not step in with being elected. Also some MPs usually vote on party lines rather than how their constituents wish. ?? ?? ?? ?? ...read more.