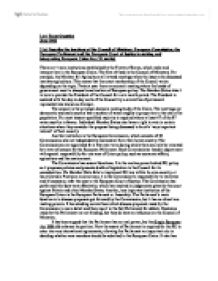 Describe the functions of the Council of Ministers, European Commission, the European Parliament and the European Court of Justice in making and interpreting European Union law.

Law Exam Question June 2003 3 (a) Describe the functions of the Council of Ministers, European Commission, the European Parliament and the European Court of Justice in making and interpreting European Union law (15 marks) There are 4 main institutions established by the Treaty of Rome, which make and interpret law in the European Union. The first of these is the Council of Ministers. For example, the Minister for Agriculture will attend meetings when the issue to be discussed involves agriculture. This means that the exact membership of the Council varies depending on the topic. Twice a year there are summit meeting where the heads of government meet to discuss broad matters of European policy. The Member States take it in turn to provide the President of the Council for a six month period. The President is assisted with the day-to-day work of the Council by a committee of permanent representatives known as Coreper. ...read more.

It is the motive power behind EU policy as it proposes policies and presents drafts of legislation to the Council for its consideration. If a Member State fails to implement EU law within its own country, or has violated a Provision in some way, it is the Commission's responsibility to intervene and if necessary, refer the case to the European Court of Justice. The Commission has performed this duty very effectively, which has resulted in judgements given by the court against Britain and other Member States. Another, less important institution of the European Union is the European Parliament or Assembly. The Parliament's main function is to discuss proposals put forward by the Commission, but it has no direct law-making powers. It has standing committees which discuss proposals made by the Commission in more detail and then report to the full Parliament for debate. ...read more.

These too hold office for six years. The ECJ has three main jobs. It hears cases against members states who are not following the EU law. For example, Re Tachnographs - The Commission v. The UK, where the UK was charged with not implementing a directive to install electronic equipment in lorries. If the case cannot go any further in the member states' own court hierarchy, which in Britain is the House of Lords, then the court has to refer the case to the ECJ if it involves EU law. This is known as mandatory referral as they have no choice but to refer it. Because the ECJ has so much work to do, a Court of First Instance was set up in 1988 to deal with some its work. They ensure that laws across the Member States are all in line with EU law and bring the laws up to a certain standard, while the ECJ helps to clarify any problems faced in interpreting EU law. ...read more.